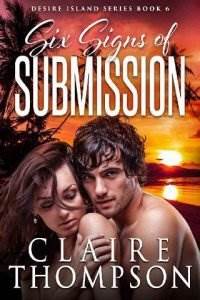 Cooper Hanson caught a glimpse of the woman out of the corner of his eye. He immediately lost his concentration.

Reaching up, he replaced the barbell on its rack and sat up to get a better look. Beyond the glass wall that separated the weight room from the aerobics space, a tall, slender woman—maybe five foot eight—was setting up step platforms in rows in front of the mirrored wall.

Wiping the light sheen of sweat from his face with his workout towel, he rose from the bench and moved toward the glass to get a better look. He guessed she was mid-to-late twenties. Her long, chestnut-colored ponytail swished as she moved. His eye was drawn to the words printed in red across her bright yellow tank top: Doing it for ME.

She was definitely doing it for him, with that slender, toned body, her breasts round and firm, her tan, smooth legs shapely with muscle.

There was no telltale black leather collar around her neck, which Caelan had told him all the staff slaves on Desire Island wore. Did that mean she was a Domme? Or just a day worker with zero interest in kink? Whatever she was, Cooper needed to find out more.

“I have a sudden urge to take an aerobics class,” he muttered under his breath.

There were several women milling about in the bright, sunny space, setting out their towels and chatting quietly. He took up a spot at the back.

The instructor raised her head and their eyes met for an instant. Cooper caught his breath. In striking contrast to her dark hair and olive complexion, her eyes were a startling shade of violet-blue, fringed with thick, dark lashes that appeared untouched by mascara. They were the most beautiful eyes he’d ever seen.

But there was more than mere physical beauty at play here. Something in her gaze bypassed his brain and lodged directly in his cock. He instantly visualized her naked, her arms suspended high overhead, ropes pulling her taut.

“Beg me,” he growled in the fantasy.

“Please, Sir,” she replied, her eyes wide with fear and desire. “Whip my breasts. Spank my ass. I need to be punished. Make me suffer for you, Sir.”

She shifted her gaze from him to the room at large, breaking the sensual spell she’d woven around him. With a brisk clap of her hands, she said, “If y’all will each take a place behind a step, we’ll get started.” She had a lilting, Southern accent, her voice clear and pleasant. What would she sound like when she gasped with pleasure… or pain?

“Let’s go around the room real quick and introduce ourselves. For those of you who don’t yet know me, I’m Lainey Miller.” She nodded toward a woman in the front row. “Just tell us your name and whatever else you want to share.”

They went around the room. Since there were only six of them, not counting Lainey, it was soon Cooper’s turn. “Cooper Hanson,” he said. “The odd man out,” he added with a grin.

“You need to get in the front row so we can watch those tight buns in action,” an older woman in his row who had introduced herself as Mistress Donna said in a smoky voice.

“Now, now,” Lainey said with a laugh. “Let’s not scare away the lone guy in class.”

Not a chance, Cooper thought, but he just smiled.

Lainey tapped at her watch and music flowed from the overhead speakers—an instrumental song with a thumping bass. “We’ll stretch and warm up first. Go at your own pace.”

As Lainey led the group through their exercises, Cooper’s imagination went into overdrive. In his mind’s eye, she was now lying over his lap, her arms extended along the couch, her legs trapped in his. He admired her small, round bottom, whose creamy flesh he would soon turn a bright, cherry red. Cupping his hand just so, he brought it down hard against her soft skin. Each breathy cry and plea for mercy only spurred him on.

When he couldn’t hold out another second, he flipped her over and stretched his naked body over hers. She arched up to meet him as he plunged his raging erection into her sopping cunt.

Suddenly aware of the bulge now tenting his shorts, Cooper snapped out of it. He forced himself to focus on the workout as he got his body back under control.

“I’m going to get to know you, Lainey Miller,” he silently vowed as the workout came to a close. “Very, very well.”

“Just think about it,” Caelan Macauley, one of the trainers at the resort, as well as Cooper’s friend from their college days, encouraged. They were sharing a drink at the tiki bar on the beach that evening before dinner. It was Cooper’s third day on the island. “You’ve sold your business and you’ve said you’re somewhat at loose ends. We’re looking to add more Doms to the staff, especially during season. Ella and Ryan agree with me that you’d be a great addition. The pay’s quite decent, not to mention free room and board. It doesn’t have to be full-time. You could teach a few classes with impact toys and rope. Maybe mentor some of the dominant clients with specific agendas—that kind of thing.”