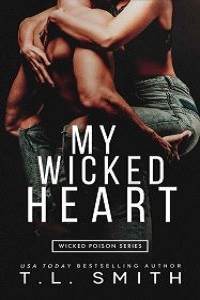 Rhianna’s soft hands wipe at my face. She’s worried. She wants my tears to stop. But how do you make your heart stop bleeding?

I haven’t figured that out yet.

It’s been five days since I last saw him.

He was at the police station.

Noah won’t tell me where he is. Rhianna has even tried to get the location from him.

Noah knows, and he’s keeping it a secret, or he doesn’t—I can’t be sure which one.

Rhianna stays next to me. She has been by my side for the last five days. I should feel sorry for Noah that I am hogging her time. But I need her. I really need her right now.

The door to the room flies open, and Beckham stands in front of us, his eyes red and his face stone cold. Without thinking, I reach for him, but he steps back, shaking his head. Beckham never steps back from me, maybe from Rhianna but never from me.

His head lifts and his eyes fall on me, then they turn into angry slits.

“Beckham.” Rhianna rises from the bed and steps over to me. We both stand in front of him. “What happened?” she asks.

We hear the door to the apartment open. Noah comes straight to where we are in my doorway. His eyes fall to Beckham before they shift to Rhianna and me.

“She’s dead,” Beckham says. I’ve never heard him so angry before. So … volatile.

“Who?” I ask as Rhianna sucks in a breath next to me.

Noah walks in, pushing past Beckham while I stare at him.

“Beckham, I…” I have no words. The tears that leave my eyes now are not for August but for the young boy standing in front of me. “Beckham,” I say again, reaching for him. He shakes his head and steps back once more, so I can’t touch him.

Since that day, Paige had been in the hospital, and she lost so much blood they had to give her more. Which caused an infection.

I had hopes she would be fine—she was young and healthy.

“Beckham,” I repeat his name and reach for him. Not letting him get away from me this time, I throw my arms around his neck and hug him tight. He loved her. He and Paige had something beautiful. Being friends first, their love turned into something special. Even my mother liked Paige, knowing who she was and where she came from.

She was good for Beckham.

“Rylee, let me go,” Beckham says. I drop my arms from around his neck, and he takes a step back. “August was there as well,” he says, and his words are like a punch in the gut. “He may have been cleared, but I’m pretty sure he’s going to find Josh and pull him from the grave simply to beat his ass.” Beckham smirks.

I’m not sure if he’s being truthful or exaggerating. I haven’t seen August to know. He refuses to see me, even when they held him at the station while they investigated. Thankfully, Glenn got there early enough to see most of it, and it was an open and shut case. They were thankful to have Josh off the streets, but also, August was there, and he shouldn’t have been.

I turn to see Rhianna’s head on Noah’s chest as he strokes her hair to calm her down.

“Where is he?” I ask. Noah’s hand pauses for a second, it’s so quick I almost miss it, and then he shakes his head. “Just tell me where he is. His sister died,” I yell at him.

“Last I heard he was heading to Josh’s house.” I look back at Beckham and see him watching Noah with sad eyes. Noah shakes his head at Beckham but doesn’t say anything.

“Do you want to come?” I ask Beckham.

Beckham’s hands slide into his pockets, and he nods his head once.

“No, Rylee. Stay here.” Rhianna pulls herself from Noah’s arms and reaches for me. I don’t let her.

“No, you do not,” she says, her voice higher than usual. “You don’t know what you’re about to walk in on. Stop and think.”

“No. I’ve stopped and thought. I need to go.” I walk out of my room and snatch my keys from the kitchen counter. Beckham is right behind me as I keep walking until we reach the car.

“Rylee.” We both turn to see Glenn, Paige’s father, standing there. Glenn has sunglasses covering his eyes, so I can’t see the pain that I know will be radiating off of him, but I can feel it. “Beckham, where are you going?”