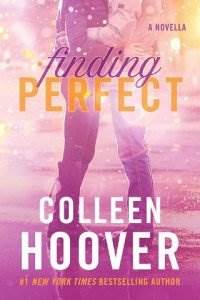 I pick up the controller and try to hand it back to him. “Just one more,” I say. Or beg, really. But Breckin already has on his ridiculous puffy jacket and is making his way to my bedroom door.

“Call Holder if you’re this bored,” he says.

“He had Thanksgiving dinner at his dad’s house yesterday. They won’t be back until tonight.”

“Then ask Six to come over. I’ve hung out with you enough today to last me until Christmas break. I have family shit tonight.”

That makes me laugh. “You said shit.”

“Wait. You coming Saturday?” On our drive home from school a couple days ago, Holder suggested we do a friendsgiving while we’re home on Thanksgiving break. Sky and Six are going to cook. Which means we’ll probably end up ordering pizza.

“Yeah, I’ll be there. But only if you stop pointing out my religious flaws.”

“Deal. And I’ll never call you Powder Puff again if you stay and play one more game with me.”

“You need to go somewhere,” he says. “You’ve been playing video games for twelve hours. It’s starting to smell like a waffle cone in here.”

“Why do you say that like it’s a bad thing?”

“I meant it in a bad way.” Breckin closes my door and I’m alone again.

I fall back onto my bedroom floor and stare up at the ceiling for a while. Then I look at my phone and there’s nothing. Six hasn’t texted me at all today. I haven’t texted her either, but I’m waiting for her to text me first. Things have been weird between us for the past couple months now. I was hoping it was because we were in a new setting, both in our first semesters of college, but she was quiet on the drive home two days ago. She had family shit yesterday and hasn’t even invited me over today.

I feel like she’s about to break up with me.

I don’t know why. I’ve never had a girl break up with me. I’m the one who broke up with Val. But I would think this is what it’s like just before a breakup. Less communication. Less making time for each other. Less making out.

Maybe she does want to break up with me, but she knows it would hurt the awesome foursome we’ve got going on. We do everything with Sky and Holder now that we’re all in college together. Breaking up with me would make it awkward for all three of them.

Maybe I’m overthinking things. Maybe it is college that’s stressing her out.

My bedroom door opens and Chunk leans against the doorframe, arms folded. “Why are you on the floor?”

She takes a step back so that she’s technically in the hallway. “It’s your turn to do dishes.”

“I don’t even live here anymore.”

“But you’re home for Thanksgiving,” she says. “Which means you’re eating our food and using our dishes and sleeping under our roof, so go do the chores.”

“You haven’t changed at all.”

“You moved out three months ago, Daniel. No one changes in the span of three months.” Chunk walks back down the hallway without closing my door.

I have the urge to run after her and disagree with her about people not changing in just three months, because Six changed in that short of a time span. But if I disagreed with her, I’d have to back it up with an example, and I’m not talking to Chunk about my girlfriend.

I check my phone one more time for a text from Six and then push off the floor. On my way to the kitchen, I pause at the doorway to Hannah’s bedroom. She doesn’t come home as often as I do because she goes to college in South Texas and has a full-time job.

I haven’t found a job yet. That’s not surprising, though. I haven’t filled out a single application.

Hannah is sitting up in bed with her laptop. Probably doing homework for med school or something equally responsible. “Do they still make you do dishes when you come home?” I ask her.

She glances up at me before looking back down at her computer screen. “No. I don’t live here anymore.”

I knew she was the favorite. “Then why do I have to do chores?”

“Mom and Dad still support you financially. You owe them.”

That’s a fair point. I remain in her doorway, stalling the inevitable. “What are you doing?”

“Want to take a break and play video games with me?”

Hannah looks up at me like I’ve suggested she murder someone. “Have I ever wanted to play video games with you?”