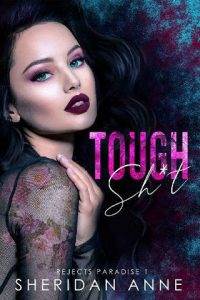 Thick smoke billows inside Dominic’s car, threatening to suffocate the five of us and if we weren’t having so much fun, we’d probably be worried. You know what they say about hotboxing a car ... actually, I’ve got no fucking clue what they say about that but when the opportunity presented itself, I wasn’t about to say no.

What can I say? I like to live on the wild side, and if tonight is going to be my last night with my boys, then you’d better believe that we’re going to fuck shit up.

I pinch the joint from between Sebastian’s fingers and ignore his irritated protests as I bring it to my lips. “Hey, what gives?” he demands, reaching for it, only to miss it by mere inches.

I grin wide, my eyes glistening with laughter and I relax back on Elijah's lap. “Too slow, Sebastian,” I tease, rocking the joint back and forth between my fingers. I wink, loving how easy it is to torment him. “Though, that’s always been the way with you when it comes to me.”

Sebastian rolls his eyes and flops heavily into the backseat. “Screw you,” he says with a soft chuckle, his eyes scanning over my body. “I could have had you if I tried hard enough.”

Dominic scoffs from the front seat and my eyes slice toward him to find him staring out the window. Both he and Kairo stare adamantly out the windshield watching the newbie dickheads of his father’s gang fuck up their deal in the park.

Sebastian’s hand swipes toward me, stealing my attention away from Nic. I pull the joint back, narrowly avoiding it being swiped from between my fingers. I grin back at him. “Just like I said. Too slow.”

Sebastian groans and I laugh. He’s one of my best friends and though he’s the biggest flirt I’ve ever met, there’s never been anything between us. He's like a brother to me, the best kind of brother and I hate that I have to move away from him. Apart from Dominic, leaving Sebastian is going to hurt the most. It’s going to be an excruciating kind of pain, but when it comes to my crew, all it would take is a single phone call for the four of them to drop everything and come running.

“What’s the big deal anyway?” I question, studying the sharp lines of his handsome jaw. “It’s not as though you don’t have four more of these bad boys hidden in your pocket or shoved halfway up your ass.”

He ignores my stab and rolls his eyes. “You know damn well that I don’t give a shit about you getting high. I'll fucking welcome it if it means a shot at tasting that sweet pussy before you go, but you and I both know that the problem is Nic kicking my ass for letting you take it. Not to mention, he’s currently scheduling a second beating for that comment about your pussy.”

I laugh as Dominic grunts from the front. I keep my gaze locked on Sebastian. “If Nic has a problem with it then he can grow some balls and speak to me about it instead of messing up your pretty face. Black and blue aren't exactly your colors.”

Sebastian groans as Elijah’s arm tightens around my waist, over-protective at the thought of me and Nic having it out. We’re both passionate people, and seeing as though angry-sex is off the table, that only leaves one other option and we all know it wouldn’t be pretty.

“Go to hell,” Sebastian chuckles, unable to keep the smirk off his face.

Kairo shakes his head, keeping his eyes trained out the front windshield, somehow able to ignore the thick smoke in the car. “I always knew you were some kind of devil.”

Dominic scoffs, his eyes flicking up and meeting mine through the rear-view mirror—dark and way too intense. “More like an angel in disguise.”

My stomach clenches and for a moment, it’s too hard to look away. That is until I remember how he crushed me six months ago. Even still, with that pain sitting heavy on my chest, I can’t possibly pull myself away from him. I love him and I always will. Nic is my world, he’s my best friend and the man who saved me from myself. I’ll just never be stupid enough to let him into my bed again.

Kairo starts murmuring beside Nic, knowing damn well that he’s the one Nic is going to send to fix the newbies fuck-up. I silently thank him for the distraction. Nic is too much. He's intense and knows exactly what it takes to make me the happiest girl in the world, but he also knows how to take it all away.

I lean back against Eli’s wide chest and finally bring the joint to my lips. I inhale deeply, closing my eyes with the hit.