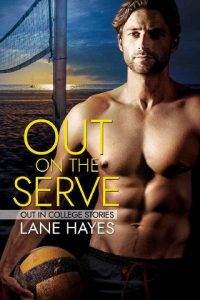 “Kindred spirits are not so scarce as I used to think.”—L.M. Montgomery, Anne of Green Gables

Rain pelted against the sliding glass window, and the wind whistled through the tiny crack where the front door was propped open by a single red flip-flop. Three neatly stacked boxes and two giant suitcases blocked the path to the living area. Hushed conversation drifted from the bedroom. The words weren’t clear, but there was an unmistakable note of urgency in the high-pitched voices that communicated a desire to move quickly. I was in complete favor of that. I hated moving.

Thankfully, I didn’t have much to do here. My main chore was to schlep a few boxes and meet a potential roommate. According to Sophie, I was going to love this guy. Her extra intonation on the L-word made me wary, but Soph was a theater girl. Everything with her was a little “extra.” Including her exit. She brought my ex-girlfriend with her “to help her pack.” Anna and I were cool, but geez, this felt like the longest day ever.

I stuck my hands into my pockets and strained to listen for a hint that they were almost ready.

“Good. We’re packing up the last bits in the closet. Braden should be here any minute,” she called from the bedroom.

Any minute could mean twenty with Sophie. Plenty of time to make a sandwich. I skirted the kitchen island and opened the refrigerator, staring at the mostly bare shelves before pulling out a package of cheddar cheese and a stick of butter. Grilled cheese was easy. And it was comfort food. Not that I needed comforting. I didn’t. This situation was just…awkward.

I set the cheese and butter on the counter just as Sophie and Anna appeared carrying a couple of overstuffed tote bags and a ruffled pink-and-yellow duvet between them. They could have easily passed for sisters. Both were on the petite side with long blonde hair and blue eyes. Sophie was an inch or two taller than Anna, and she was uber vivacious—the type of person who woke up singing musicals, cleaned incessantly, and laughed at all my dumb jokes.

We’d been good friends since freshman year when I tripped over a keg at a party and almost knocked her over. I caught her before she fell into the hedge, but her heel came off and I think I ripped her shirt too. I was a big dude—however, I wasn’t usually that clumsy. I’d braced myself for her to go apeshit crazy on me, but she laughed and started reciting Shakespeare. “For never was a story of more woe than this of Juliet and her Romeo.” I only knew that because she spent the rest of the evening telling me about her plans to become an actress of the stage and cinema. According to her, my lack of appreciation for the arts was the reason we were never more than friends. The other reason was Anna.

Sophie dropped a bag on the floor, squeezing my arm on her way to greet the new guy as Anna sidled up next to me. She tore off a strip of cheddar cheese and popped it into her mouth.

I smacked her hand playfully, then offered her another piece. “What do you know about this guy? On a scale from one to ten, how big of a theater geek is he?”

Anna chuckled. “I think a six, but don’t quote me. Sophie told me you know him.”

She made a zipped-lip motion and winked. “She wants to surprise you.”

“Liar,” she huffed, inclining her head toward the new arrival. “He’s tall.”

Anna’s eyes sparked with ready humor as she set her tiny hand over mine. Was it wrong to say I still thought she had the most beautiful smile I’d ever seen?

Anna and I were together for three years. We met in English Lit during our sophomore year and were inseparable until our breakup last May. It had been tough on both of us, but I was the one who’d initiated it, and the guilt still haunted me. I didn’t necessarily regret my decision. I loved Anna—just not the way I thought you were supposed to love the person who said they wanted to be with you forever.

I glanced at Sophie and the new guy, noting his lean, muscular physique. His back was turned to me, so I couldn’t see his features. I was tempted to ask Anna if she could tell if he was cute, but I wasn’t sure our relationship was quite there yet. I hooked my arm around her petite shoulders and gave her a playful hug.

I furrowed my brow and squinted like an owl. “Really?”

“Don’t ask. I don’t know anything else. Come on. Let’s go meet the mystery man.” She laced her fingers with mine and pulled me toward the sound of Sophie’s friendly chatter.