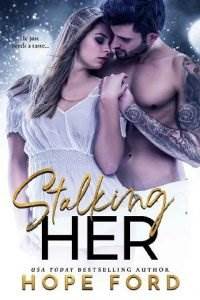 I have a stalker.

I should be scared. I should probably tell someone. But I’m not going to. It would be different if I thought he wanted to hurt me. But I’m pretty sure he doesn’t. As a matter of fact, I think he wants me.

I’m trying not to be obvious, but it’s impossible. I’m searching for him and won’t be satisfied until I get to see him. It’s like I feel agitated and on edge and I don’t know why. He’s a stranger. Well, mostly. This is the third Saturday in a row that I’ve come to Blaze. It’s a night club, and night clubs are not my thing.

I’m an attorney; actually, I just recently graduated law school and have just started at Simon, Schwartz, and Teller. I have my first big case coming up in a few months, and I should be home preparing, but instead I’m here with two women from the office. They are attorneys but have more experience than me. The first time they asked me to come with them, I agreed because I knew I needed to play nice with my coworkers. But now, I’m coming for a completely different reason.

Lane Davis. He’s a bouncer. Head security for Blaze. I noticed him the first time I came here, and he watched me every second. Every move I made, his eyes were on me.

“That one’s cute,” Brenda says, interrupting my thoughts when she points at a man standing a few feet away. “And there’s three of them,” she says happily.

I barely resist rolling my eyes. Brenda and Cassie are both tall and thin. If they ever decide to quit their day job, they could quite literally make a living as models. And then there’s me. I’m short and curvy and their exact opposite. She always finds three guys for us to dance with, and I hate seeing the disappointed look on the third one’s face when he discovers that he didn’t get Brenda or Cassie. No, he got me. The short, frumpy one.

“Yeah, cute,” I remark, just so they don’t notice that I could care less about the three clean-cut guys they’re looking at. I’m in search of my tall, dark, tattooed stalker.

Lane’s never said a word to me. He still hasn’t. But he’s so far under my skin it doesn’t even matter. After the first time I saw him, the next day I noticed him at the grocery store. Since then, I’ve seen him outside my office, my apartment building, and the gym. He never says a word. Just watches me.

I freaked out a little bit at first and can admit I was scared. I know he could have been a psycho or something, but my gut was telling me different. I called Blaze, and with the description I gave them, they were able to give me his name. He’s head of security, and I have no doubt it would get back to him that I was asking about him, but I didn’t care. I had to know.

Next, I called my sister-in-law. She’s a police officer, and I knew she would help me. I didn’t tell her why but asked her to look into him. She asked me what all I needed to know, and I told her anything she could find. Well, she didn’t disappoint. She came back to me in less than an hour. Lane Davis, thirty-two years old, no criminal record. He received a parking ticket three years ago but looks like it was paid the same day it was issued. He’s divorced. Finalized two years ago. Records indicate infidelity.

I texted her back, holding my breath. “He cheated?”

And her response was immediate. “No. She cheated.”

From that moment on, I decided to go with my gut. Lane is nothing like the men I’ve dated in the past. He’s not clean-cut. He’s not goofy or vain or way too into himself. No, it seems he’s way into me. And that’s why I’m here at Blaze again. I’m going to get him to talk to me one way or another.

I look at the door that leads to the back, and suddenly he appears. He doesn’t look around like he usually does; his gaze goes straight to me, and I melt in my seat. I swear when he looks at me it’s like he’s burning a hole in me. Instead of blushing and looking away like I normally do, I look at him as if I’m challenging him. How can I convey in a look that I want him to talk to me? Heck, I will take anything with him.

He crosses his arms over his chest and stares right back.

I feel a nudge in my side and a whispered yell in my ear. “They’re coming over.”

Reluctantly, I drag my gaze from Lane and look at the three preppy guys in the button-down shirts as they walk toward the table.