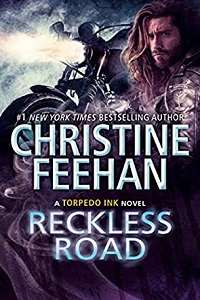 Fog churned over the ocean, the wind blowing the roiling mass over the highway, turning the silvery night a dark, angry gray. Wisps curled around the truck as Gedeon “Player” Lazaroff maneuvered one of the severely tight curves on Highway 1 along the Northern California coast. He was familiar with the highway, but most of the time he rode his Harley and had his brothers riding with him. In some ways he was thankful they weren’t with him, but he would have welcomed the comfort of their company.

The dark gray mist thickened so it seemed an impenetrable wall, and he slowed down, although he was so close to home his inclination was to step on the gas to get there faster. He was nearly desperate to make it back to the Torpedo Ink clubhouse and the solace of the room he used there. He owned a house and normally would have gone there, but at this point, he didn’t have the time. The clubhouse was much closer, and the longer he was out in public, even in the seclusion of the truck, the more dangerous it was. He knew that, and he had vowed never to take chances with anyone’s life again.

The cell played Master’s short tune announcing a call, and Player hesitated, swearing under his breath. Sweat beaded on his forehead and trickled down his face. He wiped at it with his palm before hitting the Bluetooth. Cell phone service was spotty at best on Highway 1, and he hoped it wouldn’t work. Naturally, he wasn’t that lucky.

“Yeah?” He was abrupt. Off-putting. Hoping Master would get the hint.

“About four miles from home.” Deliberately, he hadn’t distinguished between the clubhouse and his residence.

There was a small silence. Four miles from home meant Player had been pushing hard. Far too hard. Risking trouble. Already, they’d broken the rules by separating. Torpedo Ink members stayed close. When running a mission, they paired up, eyes on each other at all times. They’d gotten into unforeseen trouble, and Player needed to get home fast. Master wasn’t able to drive as fast. He carried an unexpected passenger with him, and Player couldn’t risk being in close proximity with her, not in his present state of mind, although he’d only told Master he was feeling very sick and needed to get home.

Master had to drive the passenger’s vehicle home anyway, so it had all worked out for the best. They’d reported to Czar and let him know Player was coming in early without Master, and Master was bringing in “baggage.”

“Pull over. I’ll send someone to you.”

“I’m close. I can make it. Just one of my damn headaches.” Player poured confidence into his voice, ignoring the way the road seemed to be coming alive with the fog wrapping it in loops and whorls like smoke from a pipe. “Less than four miles now.” He shook his head trying to clear it. All that did was rattle his already hurting brain. He clenched his teeth against the pain.

“You sure? Go to the clubhouse—it’s closer.”

“Yeah. Good idea. I can make it.” He could. There was no one with him. He was good. Just make it into the yard. Park the truck. Get to his room and lie down. His head was pounding. It felt like his brain was coming apart. He had made it home a day early, so that was a good thing. “I can make it, no problem,” he reiterated, trying to sound unaffected.

Blue and red cut through the gray veil of fog in the rearview mirror, and he cursed silently as he looked down at the speedometer. Shit. Speeding. He could have sworn he’d slowed down. Hadn’t he? He couldn’t remember now. He was sweating bullets.

“Gotta go, Master, you’re breaking up anyway.” He needed to concentrate. He dropped the connection before Master could protest.

They had run what was supposed to be an easy assignment, trailing a couple of Ghosts that Code, their computer genius, had uncovered. Find out where the two were going, which motorcycle clubs they were targeting next. Easy, right? Torpedo Ink wanted to know who they were.

The Ghosts turned out to be businessmen who had been preying on weaker members of the various outlaw motorcycle clubs, specifically those members who gambled, getting them in deep and then making certain that they gave up information on the clubs running drugs or guns or trafficking in return for getting out of debt. The Ghosts wanted cuts into those particular businesses.

When a club reacted negatively, they had the president’s old lady kidnapped, raped and tortured until the club complied or she was returned dead and another woman was taken. The Ghosts had a particularly vicious group of hit men doing their dirty work for them.

Player’s club, Torpedo Ink, had rescued two women belonging to separate MCs from the hit men the Ghosts kept on retainer. In both cases, Torpedo Ink had been hired secretly so no one associated them with the rescues. The larger clubs didn’t want it known that they had gone outside their club looking for help. Torpedo Ink didn’t want it known that they had helped. They were a small club, and they wanted to stay under the radar—from law enforcement, other clubs and definitely the Ghosts.