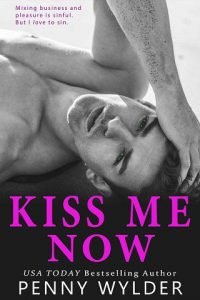 Tomorrow, my whole life is going to change.

I know, I know, money can’t buy happiness, etc. But it can go a long way toward getting you comfortable, at least. And that’s something I haven’t felt in a long time. Definitely not when I was growing up with my mother, living from skimpy paycheck to paycheck, or off of the various men she was hooking up with, whenever she was completely out of work.

Then came Norman, and God knows, that was an even worse situation.

Don’t think about him right now, I remind myself forcefully as I climb out of the taxi. Tonight is supposed to be my big night of freedom. A night to celebrate everything I’ve achieved—all on my own. The last thing I need to be reminiscing about is that asshole, and everything he put me through.

I shrug off my coat as I reach the front of the club line. My friend Becky’s already standing there chatting with the bouncer, and to judge by the sparkle in both of their eyes, I have a feeling that we’re going to be let straight inside. And that Becky will spend most of the night wanting to come straight back out for a smoke again, so she can keep this flirt on.

“Hey,” I greet her with a kiss on the cheek as I reach her.

“Cassidy! This is Marco.” Becky gestures from me to the bouncer and back, then squeezes my arm. “This is my friend I was telling you about. She’s going to be the next Coco Chanel, I swear.” Becky gestures at my face. “See? Doesn’t she look flawless?”

Beck. I side-eye her with a raised eyebrow, and Becky laughs at my expression.

“Marco and I were just chatting while we waited for you,” she says, but it’s in a tone I recognize well. We haven’t known one another since our college days for nothing. “Come on, tonight is your night.” She loops her arm through mine. “Let’s celebrate.”

“See you soon, Marco,” I tell him, because I’m absolutely sure I will. Becky elbows me for it, but I can tell she’s watching Marco’s reaction, and enjoying the way he grins and watches us as we duck past him and into the club.

“What? He was cute!” Becky protests as we stride inside. I just snicker, and she sighs, long-suffering. “Sooo … how excited are you for tomorrow?”

“I’d say more nervous than excited,” I reply. At the bar, I lean across to order us beers. Becky leans across to correct me: two shots and two beers, instead.

I tap my shot of whiskey to hers, pretty sure already that this is going to be a mistake. But what the hell. My meeting tomorrow isn’t until early afternoon, so I’ll have enough time to recover from the inevitable hangover first.

“So tell me more,” Becky insists when I pull her onto the dance floor, beers in hand after we’ve both downed our shots.

“The company’s called Anderson Investments,” I reply over the thud of the bass. “They specialize in small businesses, especially women-owned ones. Apparently the investors are a husband and wife duo, and the wife insists on investing in empowering other women who are just starting out, like she once was.”

“That’s really cool!” Becky calls back. “So you think they’re going to invest?”

I shrug. “I hope so?” Secretly, I’m pretty sure I have this one in the bag. I don’t want to jinx it, though. God knows I’ve gotten close before and wound up with my metaphorical heart broken.

Norman flashes through my mind again, and I force him out. This won’t be like that. I’m going to get a buy-in from an actual company, a business transaction. It won’t be like me trying to beg money from my rich asshole of a boyfriend, who constantly tries to manipulate me, dangling his potential investment over my head like a carrot to make me put up with whatever he wants to do in our romantic lives.

“That’ll be so incredible.” Becky’s gushing. “Once you have an investor, you’ll be able to ramp up production and really get your products out there.”

I smile at the thought. I’ve been working on building up Cass’s Cosmetics for four years now, ever since we graduated college. I’ve gotten interest from some big buyers, too, including a department store with chains in New York and LA. That kind of exposure could make all the difference for me as an upstart cosmetician. I could actually expand into a real company.