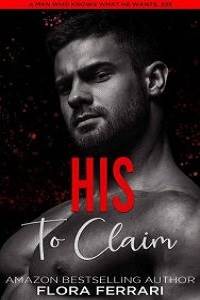 I stare out of the window and watch the countryside roll by as we make our way back to my father’s estate. The visit to see Lacy was a short one, just like all my approved visits are these days.

I’ve never been told explicitly that my dad is involved in the criminal world, but it doesn’t take a genius to figure out what all this extra security is about.

It’s the only explanation as to why I wasn’t allowed to see Lacy for more than half an hour before my father’s men started pounding on the door, yelling to see if I was okay.

Lacy’s face pinched up as though in discomfort at the noise, my old friend’s features becoming taut and anxious. I felt guilt niggling at me as I rose to my feet with a sigh.

She didn’t need me bringing this trouble to her door.

Whatever this trouble is, exactly.

Hazy late-winter sunlight dances across the fields, glinting as it melts yesterday’s snow, the whole landscape covered in its winking light.

The driver is one of my father’s men, his face fixed firmly on the road. I remember when I was a little girl how these men would make a fuss over me, talk to me openly and let me share in on their jokes to some extent.

But these last few years, all of them have receded, as though the moment I started to become a woman they knew better than to risk a laugh or a smile.

Now that I am a nineteen year old woman, they barely even look at me, probably scared that Dad won’t take too kindly to them ogling his daughter.

I hate it, not because I want to flirt or anything like that – I don’t, and anyway, I’m terrible at that sort of thing – but because it’s just so isolating and lonely.

I sigh again, wondering if that’s the fifteenth of sixteenth time, and then let out a few notes from between my lips. I used to be self-conscious about practicing my singing in front of Dad’s men, but I soon realized that it doesn’t make any difference.

Another sedan drives ahead of us, packed window to window with my father’s men, all of them ready to leap out and protect me at a moment’s notice.

This doesn’t make me feel safe like maybe it should.

Instead, I just feel trapped, even if the bars of my cage are gilded like the cliché.

But hey, maybe cliché’s exist for a reason sometimes.

I sing softly, wordlessly, trying to let myself believe that I sound good, not terrible, not embarrassing.

But self-esteem has never been my forte.

Perhaps it would be easier if I knew what I was being protected from, but Mom and Dad are always intent on keeping me ignorant where Dad’s business is concerned. It’s like they still think I’m a little kid, scared of the dark, scared of reality. The truth is I’d much rather know just what the heck’s going on than live in this in-between space, constantly wondering, constantly questioning.

“What the fuck?” the driver murmurs.

I flinch, my gaze snapping to him as shock recoils through me.

Dad’s men never swear in front of me.

The driver – a man everyone calls Snaps – is a short man with a flat face and a twice-broken nose. He glances at me in the rearview, frowning.

The car in front of us has slowed, forcing the stop.

Snaps lowers his window and sticks his head out.

“Body in the road,” another man calls back.

Ice water moves through my veins, making me cold and shivery as the words collide into me with their heavy impact.

Body in the road.

What does that mean, a human body, roadkill, what?

I lean forward to try and get a better look, but the car in front is obscuring my view of the country road.

To the left of us, trees try to creep onto the tarmac, the forest shadowy and dark within. I didn’t think about how creepily dark the underbrush was as we were driving up, but sitting here with that coldness shooting through me, it seems hyperreal.

“What sort of body?” I mutter, stunned at how calm my voice sounds.

“That’s not what I asked,” I tell him firmly.

He sighs and glances at me briefly. “I don’t know, ma’am.”

He shakes his head. “Afraid I can’t leave you.”

“I’ll check then,” I say, as if all the puppeteering has suddenly and violently become too much, all the go there, go here, stay here, do nothing.

It just explodes inside of me and I reach for the door handle.

Snaps moves quickly, locking my door. I tug on the handle but there’s no give. I sit back, already letting out a sigh of defeat.