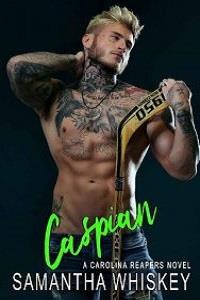 “You don’t have to do that,” I said for the fourteen-thousandth time since I walked into the house last night.

“Caspian Foster, you are my one and only son, so if I decide to make you a sandwich or three, having to has nothing to do with it. We both know I do as I damn-well please,” Mom quipped back over her shoulder, giving me the kind of raised eyebrow that would have sent London and I running for the fields when we were kids.

“Yes, ma’am,” I replied, leaning back against the counter of the kitchen I’d grown up in.

“You can at least make yourself useful and get us something to drink,” she muttered, but there was a smile on her face.

She’d been smiling since I’d come through the door, and it only served to remind me that I needed to visit more often. It wasn’t that I didn’t love my parents—I did. Life just had a way of getting busier every year, even during the offseason.

Hell, the only reason I was home for the grand total of ten days was London’s wedding next week. My baby sister was marrying one of my teammates, and in true London-style, she’d forsaken the glitz and glamor of the million-dollar wedding Sterling had offered her and chosen to swear her undying love in the same little chapel our parents had, right here in Cherry Creek, Iowa.

“Apple juice?” I asked, getting several glasses out of the cupboard.

“You know it.” She kept at the sandwiches, but her attention jumped to the clock as I poured us a few glasses of juice. London and Sterling were in town doing something that had to do with the cake, so it was just Mom, Dad, and me for lunch.

“Are you sure he doesn’t need help out there?” I asked, looking into the fields where Dad had disappeared a couple of hours ago.

“We both know he’s just out there killing time.” She rolled her eyes. “It’s called a hobby farm for a reason, Caspian. I go to bridge club with the ladies, he pretends he knows his way around a combine on the weekends. We all have our little diversions.”

By bridge club, she meant margarita night, but I didn’t say a word.

Dad was a CPA and the only accountant in town, and Mom had been running his office for just as long as she’d been running our house—forty years.

“Time to ring the lunch bell,” she muttered, taking out her cell phone and hitting the green button. Mom and Dad had refused to let me buy them a new house, or even pay this one off, but they had let me put in a cell signal booster when I signed with my first NHL team. It was the least I could do to repay them for the early morning practices and late-night games over an hour away in Des Moines. “Get in here and eat. You’re just getting in the way out there.”

She hung up without another word.

I’d also hired a few farmhands for Dad, who was certain that his improved crops of soybeans had everything to do with his talent to grow shit. It didn’t. But I didn’t tell him that, either.

My parents had something I had rarely seen and always marveled at—happiness.

Dad came in from the field and hung his baseball cap on the hook near the kitchen door. “It’s a hot one out there. Sent the men home about an hour ago. Hey, it’s about time you were up,” he teased me as he washed his hands.

A hundred degrees in Iowa wasn’t the same as Charleston. The heat was suffocating here without the ocean breeze.

“I went for a run at five a.m. You were still sleeping,” I joked, helping Mom carry the sandwiches to the table where I’d already put the apple juice.

I fucking loved this table. It was dinged up and scarred, burned in places from the numerous school projects London and I had made on its uneven surface, but it was home, and far more precious than anything my interior designer had moved into my Charleston house.

“Yeah, yeah.” He grinned, and I got a glimpse of what I’d look like in another thirty years. We had the same thick hair and square jaw, same smile and laugh. I just happened to have a few more tattoos.

We took our seats and started our lunch. Mom grew quieter by the second, glancing up at the clock every minute or so.

“What has you stressed out?” I asked her, devouring the last of my potato salad. I never ate like this during the season, but Mom’s potato salad was magical, and I sure as fuck wasn’t missing out. I’d just have to run a little farther tomorrow to make sure I didn’t take an extra ten pounds back to Charleston.