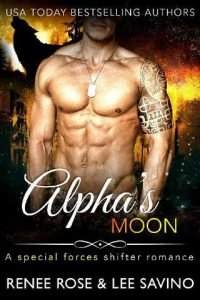 The Puerto Rican jungle is thick and humid. At night, the song of the coquí frogs chorus echo all around the stifling darkness. I creep silently over the rotting leaves on the rainforest floor, slinking into position. Channing’s already there on his belly, squinting through the sight of his sniper rifle.

“We got two guards on deck,” Channing whispers.

With our shifter hearing, we don't need comms units to hear each other. Nor do I need night vision goggles. That’s the reason Colonel Johnson created a special ops team composed entirely of shifters. He’s one of us. He knew how much we‘d be capable of when our abilities didn’t have to be hidden from our human counterparts.

A quick glance, and I clearly see the outline of two cartel members standing in front of the shack’s open door frame. Each of them hold machine guns.

“What do you think—hostage inside?” Channing murmurs. “Tied, gagged?”

“Don’t see any dogs,” Channing says. “So we wait for Rafe’s signal.”

I nod and strip out of my outer clothes, including dog tags. Colonel Johnson had special camo underclothing designed for us. The fabric is stretchy and flexible enough to accommodate both human and wolf form. I guess the army higher ups thought having our ding-dongs hanging out after we shifted back would make us feel vulnerable. Like we give a shit who sees us naked.

I shift, but try to maintain some control, to hold back my wolf. He’s antsy to get on with the hunt. The sad truth is that after years of war conditioning, he’s always ready for the kill, especially when there’s a civilian rescue involved. The need to protect sometimes overwhelms reason.

The signal is a long blast on a dog whistle, a sound no human can hear. When it comes, Channing and I dart forward. As a wolf, I’m faster, and I race ahead.

We're almost there when I pick up a rumbling sound up the road. Trouble coming in the form of an old diesel truck. Fuck! More kidnappers showing up to help stand guard.

My ears prick at the ear splitting sound of the dog whistle. Two short blasts this time—Rafe telling us to get out.

I try to turn back. To follow orders. The part of me that still knows chain of command fights for control.

But my wolf isn’t having it.

It’s too late—I smell the package. The frightened human who’s perhaps given up on being rescued.

It’s wrong to disobey a command. We may not be Special Ops any more, but wolves also follow their leader, and Rafe is our alpha. Still, I can’t stop my wolf. He needs to save the human. I bound forward, paws eating up ground as I head toward the shack.

“Abort mission,” Channing growls, but I'm too far gone. I leap, a silent shadow, onto the wooden platform.

The first guard dies almost silently. His body thumps to the deck. The other guard whirls, fingers scrambling for the trigger of his machine gun when two hundred plus pounds of wolf lands on him. He goes down, and I silence him with my teeth.

I hear shots and raise my head. My muzzle is slick, and there’s blood in my mouth. On the other side of the shack, our team attacks the diesel truck. I forced them into this by not following orders. It’s the only option now.

A few more shots, a growl from Lance’s wolf, and the sound of screams drowns out the chorus of coquí frogs for a moment. Then the truck engine cuts off, and there’s silence.

“Goddammit, Deke!” Channing whisper-shouts. He’s still in human form, slinking up to the deck with his rifle outstretched. “You were supposed to follow orders.”

My wolf bares his teeth at him.

“Fucking loco,” Channing mutters as he brushes by me. He follows proper protocol, casing each dark corner before entering the shack. A few seconds later, he starts talking in a low, soothing voice to the hostage.

I’m glad he can because I would scare the hell out of her.

I growl and turn away, my nose to the ground, making sure all threats have been eliminated.