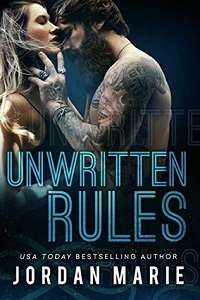 I hear them in the distance. The wracking of the pipes can’t be misunderstood. My father finally messed with the wrong people and soon the devil will be here, demanding his due. In this case the devil is a tall, tatted biker named Marcum. He’s been here before. For some reason he’s given my father at least two chances to get his shit together. He didn’t. I could have told him he wouldn’t.

I guess this is dear old Dad’s third strike. I should wake him up. He’s passed out on the stained, broken, worn out, red futon in the back room. I know because that’s usually my bed. When I came home from my shift at Jenny’s—the local diner where I cook—that’s where I found him.

I should wake him up. I should warn him. I suppose that’s what a decent daughter would do. Then again, Dad’s never been decent to me, not in all of the years I’ve known him. So, I’m having trouble drumming up the energy to care what happens to him. That probably makes me a bad person, but hell, being good never did shit for me. If life has taught me one thing, it’s save yourself. No one else is going to. Marcum runs the Steel Vipers. They’re a one percent MC club here in Florida that no one fucks with. No one, except my father. Which again, is proof that my father is a moron. One percent basically means they don’t give a fuck about rules and laws. They’re their own entity. A smart person would steer far away from them. My father has never been smart.

I run through the house grabbing my overnight bag and begin stuffing what clothes I can find in it. I’ve got to get out of here. I know enough about Marcum and his thugs to know they leave no witnesses. Maybe I’m a bitch and risking great cosmic issues of epic proportion, but my father made his own bed and I’ve been on the receiving side of his fists often enough that I don’t really give a damn. I’ve only stayed here this long because of my grandmother. She died last week. She had been living in a local nursing home facility. I always said that when something happened to her I would kiss Crescent City goodbye. But I’m still here, trying to come up with money to move.

The most I’ve accomplished is trying to live on my own. That didn’t work, my father found ways to spread his shit to my new place, so it was just easier to stay here.

The roar of the bikes is getting closer. I took too long trying to get my crap. My hands are shaking as I grab my keys off my dresser. I can hear them pull into the drive. I’ll come back for my car. I can’t risk going out there. I run through the back of the house, even as a fist is banging against the front door—almost hard enough to make it collapse. I gasp, and then bite my lip painfully to stop the noise. I’m sure it’s impossible for them to hear me, but I don’t want to chance it. I bite so hard I can taste the bitter, coppery tang of blood in my mouth. I ignore it and then go straight for the small bathroom at the back of the house, right off the kitchen. I close the door quickly, which dulls the yells of Marcum demanding my father open the door. My hands are shaking as I close the lid on the commode and then climb on top of it. I push on the small window, pulling it up. I would have preferred a bigger window, but this is the only one in the house that doesn’t have a screen. Once I get it pushed up, I throw my bag out first. I hear it land on the ground, but luckily it’s quiet enough I doubt it will alert the others. Next, I heft myself up and swing one leg over the ledge and then contort my body to the outside while I slowly slide down the back of the house.

“Look what we got here boys!” a man calls out, just as I feel his large hands capture my hips, locking me in his arms and making me his prisoner. My heart somersaults in my chest as fear wraps around me. I was stupid to grab my stuff first.

What in the hell was I thinking?

“Is that Weasel’s kid?” another asks.

“She don’t look much like a kid to me. She’ll make a good addition to the club talent,” I hear from another one. I’m afraid to look at him. My hands are on the shoulders of a very tall man, who probably isn’t much older than I am. He’s got dark hair which is cut unevenly and sticking up in different directions on one side of his head, but done so in a jagged enough pattern that it looks good. He’s covered in ink; I can see it on his neck and on his thick arms that stick through the leather club cut he’s wearing. His eyes are brown and where I expected hate and anger, I see none. I don’t even see the look of interest in my body. I can literally feel those looks from the other two men standing close to us, but not from him. I almost feel…safe. I start to calm down. Maybe this won’t be as bad as I feared. Most things aren’t… Right? Your mind always creates worst case scenarios. Maybe this is one of those cases. Maybe this guy will be my savior.