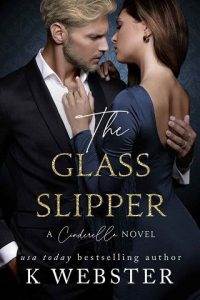 Since my birthday party.

That’s how long my useless maid, my filthy toy, my Cinderelliott has been keeping this secret from me. Not just any secret, but conversations behind my back with Leo motherfucking Morelli about God only knows what.

I’m disgusted. Furious. And a whole other array of emotions I have no business feeling.

Another tear rolls down Ash’s pink cheek, chasing after the one before it.

One. Two. Three. So many tears, each one a reminder of why I don’t do this. Why I keep my heart icy and impenetrable. Because, no matter how good something seems with the perfect woman, it can all come crumbling down with just a few salty teardrops.

Betrayal isn’t always a waterfall of fucked up like it was with Meredith. Sometimes it’s the drip, drip, drip of I should have fucking known better.

I knew this was a potential outcome.

Not whatever the hell is happening right now between Ash and Morelli.

But the secrets. The lies. The shady bullshit.

It happened with Meredith. I vowed it’d never happen again, and yet here we are. Nate and Mother practically force-fed me the warnings, but I’d been so distracted with playing games with Ash I didn’t see her playing a game of her own.

My maid is pretty when she cries. Too fucking pretty. It’s almost distracting enough to take my attention away from the reason why she’s crying. Not because we’ve made a deal and I’m humiliating her. Not because I’m delivering a little pain with pleasure. Not the usual reasons.

She’s crying because she’s been hiding something from me and essentially lying to my face. The fact her lies revolve around a Morelli is what makes it unforgivable. She knows she’s fucked up.

“Win,” she starts, but I halt her with a lift of my two fingers off the table.

“Shh,” I murmur. “Let me look at you like this a little while longer.”

Broken. Devastated. Caught red-handed. The humiliation and regret shining in her eyes is something she managed all by herself this time. I didn’t do this. I didn’t pay her for this. This was all her.

Her phone continues to buzz, but she ignores it to plead with me using just her leaking, sad hazel eyes and pouty lips. The seconds tick by. Neither of us look away.

“Are…Are you going to leave me here with him?”

Because I’m the monster here. That question hurts a lot more than I care to admit. Another reminder of why I don’t let people in. I don’t like to hurt. Not even a little bit. Cold, hard walls of I don’t give a fuck are what has gotten me through life thus far. It’ll have to get me through it this time.

“That depends.” A cruel laugh barks out of me when she flinches at my words. “Do you want me to?”

The devastation on her face transforms into irritation making the green shards in her hazel eyes nearly glow. “Don’t be a dick.”

“Too late for that, Miss Elliott. I was born that way.”

She actually rolls her eyes and for a split second it’s just me and Ash. My sassy Cinderelliott. The girl I’ve grown obsessed with. I’m disappointed at myself. So easily I allowed myself to be charmed by a fucking teenager.

My frigid demeanor has the sassiness leeching from her and she squirms in her seat. Her tits bounce slightly, so goddamn delectable in her dress, but I refuse to acknowledge them and keep my hard stare on her face.

“He told me not to tell you,” she whispers, shame creeping over her cheeks in a crimson flood. “I was scared and…”

My brow lifts as I regard her with a bored expression. “Please continue,” I urge in a flat tone. “Please tell me why you thought it was better to listen to that rat than talk to me. Me—the same man who rescued you from your disgusting stepbrothers and has more money than God. The same man who could stomp on the entire Morelli empire if provoked. I’m all ears.”

“I…” She swallows hard and closes her eyes. “The pictures of us. The videos. The texts. He has it all. I didn’t want to help him but he said if I didn’t or if I told you, he’d…”

“He’d what?” I ask coolly. “Send them to the paparazzi? Embarrass me by showing my friends? Tell my mommy?”

And what the hell does “help him” even mean?

My blood boils at the thought of Morelli using my toy against me.

I motion at her with a flick of my wrist. “For fuck’s sake, pull yourself together.”

Fire flashes in her expression. Good. She’ll do better being a bitch than playing a sniveling victim.

“Listen, little girl,” I say, leaning toward her so she can hear me well. “I came here because there’s something I needed to do. This ‘thing’ with you and Morelli is merely an unexpected sideshow for my entertainment tonight.”