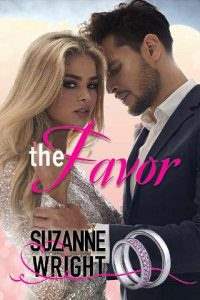 Watching my ex pick himself up off the deck, I winced at the deep cut above his eye. Ouch. He’d need a few stitches for sure. But I wasn’t feeling very sympathetic right then.

“Maybe you should do something, Vienna,” said Melinda, sidling up to me.

I gave my foster mother a helpless shrug. No one with a brain would try to get between Dane Davenport and something he wanted. And right then, what he seemed to want was to pummel my ex-fiancé into the ground.

I would not at all be opposed to that.

Owen had been something of an asshole lately. Today, he’d gone too far. He might not have made himself as problematic as the others who were set on separating Dane and me, but he’d certainly had this coming.

Melinda turned to her husband. “We can’t just stand here.”

“Why not?” asked Wyatt. “Owen should have known better.”

Why yes, yes, he should’ve. An uber-successful business mogul, Dane had a reputation for being someone you did not cross or underestimate. He was driven. Relentless. Assertive. Unforgiving. Intimidatingly intelligent. Richer than God. And, until several months ago, married to his job.

Now he was married to me.

He was also my boss.

He rarely lost his cool like this. Probably because he didn’t waste emotional energy letting others get under his skin. But as others weren’t supposed to know that our marriage was purely a business arrangement, he naturally had to play the role of possessive husband. And since there was no missing the blatant edge of danger he carried, he certainly had a menacing vibe going on right now.

Dane stared the prick down. “I warned you, didn’t I? I warned you time and time again to stay away from her, but you didn’t listen,” he reprimanded, his tone soft. “Worse, you pulled this shit. For someone who claims to care for Vienna, you sure don’t show it.”

Owen clenched his fists. “I do care for her, she’s—”

“Not yours,” Dane finished. “They’re my rings on her finger. It’s my name she’s taken. It’s my bed she shares. She is mine. So whether you care for her or not isn’t fucking relevant.”

Owen swallowed. “She was mine first.”

“And you should have held tight to her. You didn’t. You let her go. That was your mistake.”

“I did what was best for her.”

“No, you did what was best for you. You might have cared for Vienna, but you didn’t put her first. She was never your priority.”

Owen nostrils flared. “I was young back then. A kid.”

“A kid who wanted the space to pursue his ambitions. She gave that to you; she didn’t curse you for it. And how do you repay that? By trying to break up her marriage. You think she’ll thank you for that? That she’ll want someone who’d do that to her?”

My ex’s jaw hardened. “What I think … is that Vienna deserves to be loved. You’ll never love her—you don’t have that in you.”

Those words stabbed me right in the chest … because they were true. Dane didn’t love me. Never had. Never would.

I shouldn’t care. I wasn’t supposed to care. And I definitely didn’t like that I did. But I’d gone and fallen for my fake husband. Yeah, I was that stupid.

Owen jutted out his chin. “You don’t get to dictate what I do.”

“When it comes to my wife, I absolutely do.”

“You won’t keep her in the long-run, you know. She’ll see that I’m right about you eventually. Then she’ll leave you.”

Dane tilted his head, looking at him curiously. “Now why would you think I’d let her do a thing like that?”

Owen’s head jerked back. “You can’t force someone to stay with you.”

Damn, Dane was so good at acting that if he hadn’t been so clear about not wanting a real marriage, I might have believed him.

“She’s just a possession to you,” Owen insisted.

“My most prized possession, as it happens,” said Dane. “And I have every intention of keeping her. Deal with it. Accept it. Leave her alone. Get rid of this dream you have of winning her back. It won’t happen.”

Dane’s mouth curved into a cruel, chilling smile that almost made me shiver. “I’ll make you wish you had.”

Owen’s eyes flickered. “She can do better than you. You don’t deserve her.”

“And you think you do? You, who just behaved like a complete asshole, think you deserve her?”

Shame flickered across my ex’s face. “Maybe neither of us do. But—”