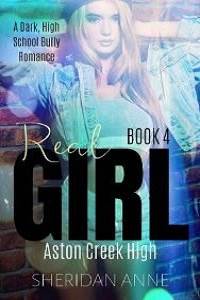 My arm stretches out over the bed, reaching for my girl. She knows better than to spread out on the bed rather than sleep in my arms. It’s where she belongs, but I guess I can’t hold her accountable for the things she does in her sleep…though I certainly have ways of punishing her. Wickedly, wild ways that’ll have her never wanting to leave my arms again.

Fuck, I love her.

As I feel her side of the bed, I find it cold and empty, making my eyes spring open and panic soar through me.

Where the fuck is she?

It’s an unspoken rule that Sky never wakes before me. She loves sleeping in. If that girl could trade places with Sleeping Beauty and spend the rest of her days curled up in bed, zonked out, she’d do it in a heartbeat. Don’t get me wrong, she’d demand to be woken for snacks and sex though.

I glance around her room, expecting to find her in here somewhere. She had a rough night finding out that Lucien was back in town. He’d gotten to Roman Westbrock and beat the living shit out of him, and while Roman didn’t confirm anything, he was sent here to deliver a message – Sky’s time is up.

I’ve never seen her so panicked and scared. There have been other times where Lucien has come through Aston Creek but every time, she was fierce and ready to fight, but last night, she looked defeated and it nearly killed me.

I don’t want her to give up. The second her hope begins to plummet, it’s all over. She needs to fight. She needs to survive because without her…fuck.

Sky needs to hold on a little while longer. I’ll be buying her a gun and taking her shooting today. She’ll feel better after that. More prepared at least and hopefully, it’ll give her what she needs to keep going.

She’s so strong. I’ve never met anyone like her. She’s going to be alright. I just know she will. After all, she has me standing right by her side and I’ll never let him hurt her ever again. I’ll kill him before he ever gets the chance.

I swing my legs over the side of the bed and run my hands over my face. We went to bed at 3 am and it feels way too early to be up. I grab my phone off the bedside table and light up the screen.

“Holy fuck,” I grunt under my breath. It’s 6 am. No wonder it feels too fucking early. I had three hours of sleep.

I push up off Sky’s bed and step into my jeans, pulling them up and fastening my belt before slipping my phone into my pocket. Skylah isn’t in here but considering both her closet and bedroom doors are open, I’d dare say she must have gotten up not long ago and snuck out so she wouldn’t wake me.

It’s stupid though. She probably had less sleep than I did. She should climb back into bed and get a few more hours of rest even if it means I have to lie here with her, helping to take all the pain away. Besides, I doubt there’s going to be anywhere in Aston Creek that I can get a gun before 9 am. We still have a few hours to kill.

I go to make my way out of her room when something sharp hits the side of my foot. I glance down and find Sky’s knife lying carelessly on the carpet.

My brows furrow. What the hell is it doing down there? Sky was clutching it when she went to bed last night and I can guarantee that it stayed in her palm all night long. Though to be honest, I’m kind of terrified that one night she’s going to accidentally take me out. All it would take is one bad dream and that knife would be the end of me, but usually, when she’s sleeping in my arms, she doesn’t need it.

I reach down and scoop the knife into my hand, briefly looking over it before glancing out the open door. Why the hell would she put it on the floor? She never does careless shit like that, especially with this knife. It’s important to her, the only thing she has of her father’s. This thing practically lives under her pillow and if it isn’t there, then it’s in the palm of her hand.

I slip the knife into my pocket and make my way toward her door. Something doesn’t feel right here. It’s one thing for her to have gotten out of bed early if she couldn’t sleep, but to drop her knife on the floor and leave her bedroom door open. It feels…odd.

I get to her door and find the carpet beneath my feet soaking wet.