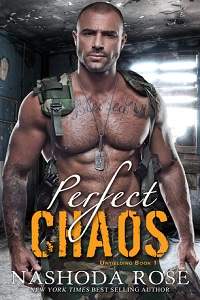 I SMOOTHED OUT the wrinkles on my bedspread then placed my stuffed brown bunny rabbit against the white-and-pink flowered throw pillow. At sixteen, I was a little old for stuffed animals, but it had been a gift from my brother the first time he went away to Afghanistan with the military.

I straightened, then saw the sheet hanging down in the right corner and quickly tucked it back into the mattress. Perfect. I liked … no, I was obsessed with being organized. Everything had its place, even me. I kept to the same bland, colorless clothes, the same schedule, and the same hair style. Why mess with what worked? My brother often teased me and said I should join the Canadian forces like him. I may like neat and tidy, but I hated fighting, blood, guns, and, unquestionably, any killing.

Connor knew that. He’d helped me bury my goldfish, Goldie, in the backyard when I was seven, then the hamster, Fiddlehead, when I was ten. To this day, there is a marked stone Connor had made for him near the back fence. I could see it whenever I looked out the kitchen window.

I jerked as a car door slammed, which sounded as if it was in our driveway. The sun had just peeked over the horizon; six in the morning was too early for any visitors, plus it was Sunday and Dad had the rule he and Mom sleep in. I always rose early wanting to get ahead of the day, another reason Connor said I’d excel in the military. Although, we both knew he’d never allow me anywhere near danger, which I was very content with. Danger to me was if my shampoo was missing and I had to use my brother’s instead.

But Connor wasn’t due back for another month, so that meant ... A sudden freeze hit my body, locking my limbs in place as I realized why someone might be in our driveway at six in the morning on a Sunday. My breath trapped in my throat as if clamped hands were strangling me.

No. I shook my head back and forth. Please, don’t knock.

Eyes squeezed tightly shut, I waited for the familiar sound.

Nothing. I sucked in large amounts of air for my starved lungs.

Not him. Please, not him.

My heart thumped harder and harder in its cage and tears pooled in my eyes. I couldn’t hear his footsteps, but I knew his team leader’s black combat boots were walking up the stone path toward the house.

I can’t lose him. Please.

Run and it won’t be true.

But I couldn’t move. My legs were locked in place as I waited for the nightmare to begin.

It was as if each knock was a punch to the stomach. No air. I couldn’t breathe. I was silently screaming and nothing could stop the fear gripping my insides.

I heard my parents’ bedroom door open and the shuffling of feet down the hallway on the hardwood floors. The distinct click as the lock turned and then the front door opened, followed by the screech of the screen door.

It felt like hours as I stood in the middle of my room, afraid to look out the window and see the car I didn’t want to see. Afraid to run. Afraid to move. Hoping I was still asleep and this was all a dream.

Yes, it was a dream. I’d wake up any second. I’d call Connor today. I’d tell him how much I missed him and loved him. It had been weeks since we last spoke. I should’ve emailed him more often. Why hadn’t I?

My mother’s loud wail pierced the air, and my perfect world crashed to my feet. It was like I was being coiled in the death grip of an anaconda and dragged under the water.

I fell to my knees, my arms wrapped around myself, and I rocked back and forth as my mother’s cries became muffled as if she was being held against something.

There were more footsteps. Not quiet and soft like my mom’s. Not slow and lumbering like my dad’s. Long, confident strides.

The steps stopped outside my door, and I heard the click as the door handle turned. It was opening my soul and ripping out my heart.

I clamped my eyes shut, not wanting to see him. Unable to face him, face what he was here to tell me.

Deck’s gruff tone, I’d recognize anywhere. It scared me. He scared me but what scared me more was my body’s reaction to him. The strange tingling between my legs, the warmth on my skin and the whirling in my stomach as if I was falling from the sky.