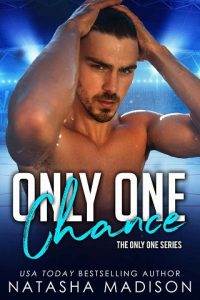 “You look like fall,” Brian, my producer and sidekick, says as I walk by his office door.

Shaking my head, I laugh as we both walk down the hallway. “You look tired.”

“Well, I was up late editing the segment I aired this morning on women’s hockey growth in the US.” His dark hand runs through his hair. “You still look like fall, though.”

“What does that even mean?” I ask him, then look down at my outfit. “It’s blue jeans and a navy blue blazer.”

He shrugs his shoulders like any man who has no idea why he said what he said, but he did it anyway. “I don’t know. Maybe it’s the brown purse.” I stop walking once I get to my office door. “Don’t forget we have the Oilers’ Manning and Miller coming in today to discuss the charity auction this weekend,” he says before walking off in the direction of the kitchen while I groan out loud.

“I hate Miller,” I grumble. Every time he’s mentioned, I automatically think back to the first time we met. It was my first week at the station, my afternoon sports radio show, Lay it on You, was on the air, and the radio station was having a fundraiser. He showed up to the event looking equally charming and arrogant clothed in dark jeans and a tight T-shirt. When we were introduced, he told me that he loved my show, especially my commentary on hockey as a sport, being as it was underrated in the South. I was super proud of those first few segments. He’d touched my arm gently and not at all creepy, and he actually made me laugh at a couple of jokes, which is hard to do. We were talking, he was flirting with me, and to be honest, I was flirting right back with him. I stepped away for a second to go to the bathroom, and I walked out to find him tongue fucking a blonde against the wall. Ever since then, I’ve taken him at exactly face value. ‘Make out with anyone literally all the time because you’re not special, Layla’ value.

Grabbing the handle to my office door, I open it, mumbling, “How could I forget Manwhore Miller?” The sun shines on the signed Dallas Oilers jersey I have framed in my office. It was from the All-Star game last winter. Framed pictures of some of my sports idols that I’ve taken fill the wall. I never expected to be a sports commentator; it happened by luck. When I applied for a job at the local college radio station, I thought they would put me to work on the marketing front, but instead, they had me calling the hockey games because the last announcer had quit that afternoon. It just stuck, and I fell in love with it. Hockey, sports, commentating—all of it.

Brian sticks his head into my office on his way to our recording booth. “Ready?” he asks. I nod my head, grabbing my stuff and following him down to where we do the show. He walks into his producer booth while I push open the door to where I sit. Two windows give the room a bit of light. I put my coffee and notes down on the table right next to the bottles of water there for my guests. Sitting in the chair in front of the microphone, I grab the earphone and put them on.

“Check the mic,” Brian tells me from where he’s standing in front of the soundboard.

“Check one, two. The XYZ TEAM sucks,” I say, looking at him. He nods his head, then laughs, pressing a couple of buttons on his side. I hear the commercials play as I get into the zone.

“Ten seconds,” Brian says, and this time, I nod at him as I watch the on air sign light up.

“Hey there, welcome to Lay it on You, the Layla Paterson show.” I smile every time I say those words.

When I started at the station, I was an intern, and then they gave me a shot, putting me on from midnight to four a.m. I thought it was going to be dead air, but I had assholes calling in all the time trying to one-up me, and I have to say I got their sports trivia questions right ninety-nine percent of the time. Well, more like ninety-five. Thank God for Google some nights.

The ratings had never been better for my slot. When the afternoon radio show host went away for vacation, they gave me his time slot for two weeks. It was like I was the queen of the castle. I went head-to-head with the men who called in. I went toe-to-toe with the other radio show hosts who didn’t want me to leave by the end of two weeks. When they finally gave me the afternoon spot, I was with them for ten years at that point.