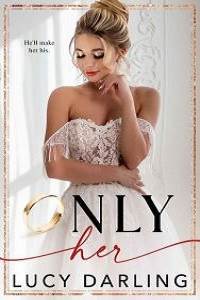 “Do you know what you’re doing?” I look up from my cell phone to my lawyer. I fight the urge to lash out at him for questioning my decision. It’s something I’m not familiar with. I take a breath knowing I’m more on edge than normal. This is what I pay him for, after all. I just need him to do his job.

“I know what I’m doing.” I go back to scrolling through my emails as we make our way across town toward the Cole house. I am formally going to meet my bride tonight. The clock has begun the countdown to when she will officially be mine. Finally. The wait has been unbearable.

“It is for the first year.” I pull at the collar of my dress shirt. I am still wondering if I should revise that detail. I guess I don’t have to make any decisions tonight. I have a week before we walk down the aisle.

I was already a bastard. I’d pushed for this marriage. I’d made a deal with her father. I wanted her to be mine, but I also wanted her to not have to worry. That’s what the prenup was going to do. It would give her security in a situation that is out of her control. But now I wonder if I’ve given her an out. A reason to leave me. I can’t have that.

“Yeah, but then what happens after the first year? She will have millions of reasons to leave you then.” He holds up the papers. He’s right, but that wasn't my only plan to get my hooks into sweet Kennedy.

I need her. The first time I saw her had been at her father's office. I’d been there to talk business with him. She came strolling in like a breath of fresh air. Her blonde shiny hair made her look as though she was wearing a halo. My angel.

The smell of lavender trailed her. When she saw me sitting there she turned and gave me her beautiful smile. The two deep dimples that were in her cheeks were an added bonus that went straight to my dick.

I knew in that instant that I had to have her. That I needed to wake up to her every day for the rest of my life. I also knew that there wasn’t anything I wouldn’t do to make that my reality.

I’d looked away from her. She probably thought I was silently dismissing her. When in reality I didn't trust myself with all the crazy thoughts I was having about William’s daughter. When I’d left his office I told myself I was going to leave it alone. That I needed to leave her alone. Someone so innocent shouldn’t be sullied by me. Yet, I knew that I wouldn’t be able to help myself.

As if I was a junkie needing their next fix I wanted to know more about her, so I began to dig. It didn’t take a man with my means too long to get information on her. Which included that she has a sister that is eleven months younger than her. The two are connected at the hip, it seems.

They’ve done everything together from going to college, to both of them majoring in liberal arts, and now they both sit on very prominent boards for different charities. That means they must be good at what they do because they are young.

I’m sure my future wife is very good at getting what she wants. If she smiled up at me with those dimples I’d cut her a check in a second. I grit my jaw thinking of other men having done the same shit.

“Thank fuck. I’ll get started on another one first thing tomorrow.” I shake my head no. If you have a prenup, divorce will be fast. Not having one with the kind of money I make would be messy as hell and take years to resolve if I wanted to be a bastard and I would definitely be one of those if she tried to leave me.

“What are you saying?”

I pocket my phone as we pull up outside the Coles’ house. “Our meeting is over. Connor will take you wherever you need to go.” I open the door, stepping out. He tries to say something else, but I slam it in his face, done with this conversation.

What does it matter? She could take half of what I have and I’d still never burn through what was left. Not to mention the exorbitant amount of money I make in a day already.