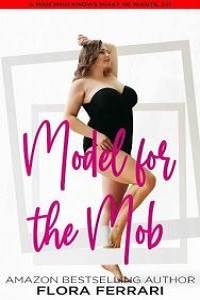 I look down from the balcony, taking in the sight of the function hall and the runway, the bright spotlights resting against the closed curtains.

The very fact that I’m here is driving a screw of rage to the base of my skull.

Franco has always pushed his luck, ever since he made a play against my family when I was only nineteen years old. That was a war that resulted in the death of my father, but for the good of the family, I signed a peace treaty.

I’d much rather have pommeled the bastard into the dirt.

The table beside us is empty. I wonder if it’s a sign of disrespect, Franco’s lateness, or if he’s really as unorganized as he seems.

I move my forefinger around my whiskey glass, looking over the assembled crowd below.

This place is asking for trouble.

We’ve got Lioni’s – my family – and Franco’s family, the Russos, all piled into one area pretending we’re friends. The only thing stopping one of us from making a move is the police presence at a table in the corner, officers none of us can afford to wound in the crossfire.

My men talk quietly all around me, around a dozen of my most trusted and loyal capos.

Aldo shifts beside me, taking off his horn-rimmed glasses and cleaning them with his shirt before replacing them. Looking at my cousin – a thirty year old beanpole of a man with a receding hairline and slight features – it’d be hard for most to imagine how tough he is, deep down where it matters.

Tough and smart, Aldo is the one who persuaded me to sign the treaty once I’d torn through the city and established my dominance.

He was only thirteen when he made that decision. He’s a wise man.

Goddamn, how was that twenty years ago?

Aldo nods, keeping his expression calm like he always does. “Maybe there’s traffic.”

I smirk and he chuckles. We both know what a bullshit excuse that is.

“Fine,” he goes on, “but there could be any number of reasons, boss.”

That’s my consigliere, always seeing the best in people even if we live a life where the worst is more prominent.

“Part of me wants the bastard to make a play on the docks,” I say, keeping my voice low. “Let him run into your armed guards. See how he deals with a proper battle.”

“That wouldn’t be good for business, boss… with respect.”

“I know.” I sigh heavily. “Fucking clerical error. Does he expect me to believe that horse shit?”

“Probably not. But you can’t call him a liar and he knows that.”

In this life calling a man, a liar is a good way to start a war. And even if part of me would relish a war – where I can let the beast out of me and focus on that task and that task alone – I know my men would suffer.

They rely on the docks and the income it brings.

We agreed to share the docks and union control equally between families when we signed the treaty, but Franco’s been pushing his luck lately. We found him redirecting containers of electronics to a private warehouse and he blamed it on an admin issue.

He lied to my face.

I take a small sip of whiskey, the first one since I got here. It burns down my throat and settles hotly in my stomach.

But nothing is as hot as my rage.

Behind me, the men mutter about the Lioni Lounge, one of my uptown clubs. I know they’d rather be there, buying drinks for the socialite women who frequent it.

I avoid the place unless I’m conducting business there.

I hate the way those women throw themselves at me, the way they dress to attempt to draw my eye, the power they think they have over me.

I don’t hate them though. They’re surviving in their own way.

But they don’t interest me. They never have.

Hell, no woman has interested me over the years. I know the men want me to find a wife and start a family. This doesn’t come from any issues of succession or shit like that. We’re not a monarchy. Even if I had a family, I wouldn’t want them involved in this life.

No, my men want me to find a woman because they can see the wild rage in me, barely contained in my every gesture, pulsing out of my six-foot-seven frame.

They know that I want a woman, but that I’ve never found one who captivates me, who grabs a hold of me and won’t let me go.

And I never will.

Finally, there’s movement behind me, and then I hear Franco’s obnoxious voice raised.

“So sorry, so sorry,” he calls, his booming raspy voice echoing around the large hall.

I straighten and turn, sensing Aldo give me a look of warning.