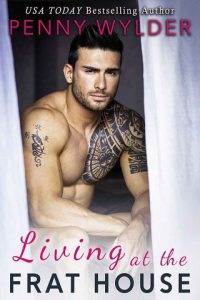 There’s no way I should have said yes to this dare.

That’s the only thought in my head as I walk across campus.

In front of me, Granite House looms large on the corner of Elm and Connecticut. My heart rises into my throat, so tight I nearly choke on it. This is the last place I want to be—at the entrance to the most notorious fraternity on campus.

Well, technically not a frat anymore. After one too many angry write-ups from the administrators over their legendary wilder-than-a-teen-college-movie parties, they were forced to officially disband. All the same brothers still live under its roof, and to judge by the rumors, they still throw just as over-the-top parties as they did before. But technically they’re no longer a fraternity. Just a collection of college students who live together and happen to be male.

Coming here tonight is my ticket into Tri Delta, the sorority I want to join. So, I have to overcome my nerves right now.

I blame Taylor, I think as I trudge along the sidewalk, Granite House’s enormous, stately façade looming over me. You can still see the faint outline against the stone where their Greek letters used to hang, sun-bleached into it by time, although the letters themselves have been removed.

Another punishment handed down from on high.

This is the last type of party I would normally be caught dead at. My parents would kill me if they knew I was standing here now. But after lunch this afternoon…

I’m not even sure how I got here. It all happened so fast. One minute Taylor, Bailey, and I were eating lunch in the cafeteria, and the next we were being swarmed by Tri Deltas. Apparently my freshman year roommate and best friend on campus, Taylor, failed to mention the tiny little fact that her older sister is the president of the most popular sorority on campus.

Melody swooped right in to kiss her sister’s cheek, all while Bailey and I fired looks at one another across the table like what is going on?

Taylor just laughed at the expressions on our faces. “Yes, my sister is the Melody Monroe. It’s not a big deal. Didn’t you guess from my last name?”

“I just figured it was a coincidence.” I shrank in on myself, sheepish.

Melody laughed too, light and airy. Even her laugh was cool. How was that possible? “Don’t worry, girls.” She touched my hand lightly then, and I felt a thrill go through me. I could feel the eyes of every other girl in the cafeteria fixed on us at that moment—and most of the guys, too.

Just being in Melody’s vicinity made us interesting. Worthy of scrutiny. What would it be like to actually be a Tri Delta like her?

“TayTay already put in a good word for you,” Melody continued. “That is, if you’re interested in pledging.”

My stomach dropped all the way through the floor at the sound of that. Of course I wanted to pledge, but… “Can we?” I asked, hating the way my voice rose at the end, nearly to a squeak.

“Of course.” Melody leaned down to steal a French fry from my plate. Earlier I practically slapped Bailey’s hand away to stop her doing the same, but when it was Melody…

I just stared, holding my breath.

When I first enrolled here, I thought about joining a sorority. I’d watched enough movies in the past to get an idea of how it might feel, to be a part of something bigger than myself. A group you could count on for your whole life. More than just friends, those girls were sisters.

Yeah, I wanted that. Cheesy as it might be.

“I should mention, though,” Melody continued after she’d finished eating my fry, “we’re very selective.”

Over her shoulder, another girl, equally beautiful and effortlessly cool, nodded. “We want to make sure our sisters have our backs. That’s what our whole pledge process is about. Loyalty.”

“Not that we play pledge games in Tri Delta.” Melody cut a glance at the other girl. “No nasty chores or anything to make you suffer.”

Another girl nodded. “It’s really difficult, but I’m sure you’ll do great.”

I smiled back. I could play this game. “Anything that I can do to make my chances better?”

She waved a hand. “Oh, just be yourself.” She wrapped her arms around Taylor and hugged her. “Have any of you been to your first party yet?”

Bailey snorted. “It’s like the second day of school.”

“And I think there have already been five or six parties,” Melody said.

“There’s one tonight at Granite House,” one of the other Tri Deltas said.

Melody rolled her eyes. “Don’t be silly, Veronica. A Granite House party is not a beginner’s party.”

Veronica laughed and also stole one of my French fries. “Just saying.”

Taylor choked on her soda. “You don’t know?”