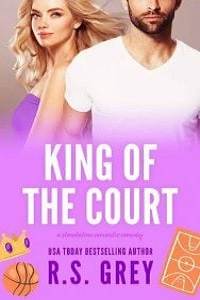 The persistent buzz from my phone is starting to grate on my nerves. It’s been going off all morning, and though I’m tempted to go right on ignoring it, I force myself to roll away from the window and grab it. I rub sleep from my eyes, sit up, and unlock the screen. It’s worse than I was expecting. I have 58 missed calls and 237 unread text messages. Another one rolls in; this one from my agent.

You’re a legend. Find a newspaper. Turn on the TV. You’re everywhere.

I don’t heed his advice. It’s early and I’m still exhausted from last night. Before I face the world, I could use some coffee and breakfast. A lot of breakfast. I’m starving. I set my phone back down on the nightstand, face down so it’s easier to ignore the barrage of people trying to get in contact with me, and then shift up and off the bed. My body screams at me to lie back down. Sore muscles, achy joints—a long playoff run will do that to you. I look down at the substantial purple and black bruise on my ribs. Carmelo Taylor elbowed me pretty damn good last night when he was trying to block my game-winning shot. Ref didn’t call the foul. Not that it matters. Nothing says Fuck you like crossing a dude over and hitting a step-back three in front of his own bench. I smile thinking about it. Without a doubt, that’s the moment everyone will be talking about this morning. The row of press positioned underneath the hoop likely captured it from every angle. Hopefully Carmelo gets a copy.

A feminine curse rings out from the living room, and I roll my eyes. I told Anthony I didn’t want him bringing any girls back to our suite. The idiot didn’t listen, which means before I head out of my room, I grab some sweats and tug them on, ignoring the protests from my ribs when I bend over.

I’d stay holed up in my room until she’s gone, but I’m hungry and thirsty.

I step out into the living room, and confetti crunches underneath my bare feet.

Clearly, Anthony had himself a little celebration after I fell asleep last night. His door’s flung open wide and there’s a girl sleeping beside him on his bed. Another one walks out of the bathroom; fortunately, this one is fully dressed.

She pops up from the other side of the living room couch and shrieks when she sees me standing there. She presses her hand to her chest as a long string of profanities escape her lips.

I actually smile, which makes it twice in one morning. A record as of late.

Her shock gives way to surprise. I scared her at first, but now that she’s registered who I am, her face goes beet red.

“Ben Castillo…” Her mouth drops open, and she looks around as if she wants to share this news with someone. “You—you were in this suite last night?” she asks, pointing to the door behind me.

What? She would have kicked my door in? Mauled me?

From the way she brazenly scans down my bare chest, I don’t think I’m that far off the mark.

I wait for something to stir inside me. Want. Need. Desire. A fucking blip of life. She’s not bad-looking. Anthony’s as shallow as they come. He likes women with curves and sex appeal, so on paper, this woman ticks every box of what should turn me on…but she just doesn’t. I’m broken. Bored. Put off by every woman I’ve encountered in the last five months.

“Do you need help getting home?” I ask, trying to move this awkward situation along. Just in case she has the wrong idea, I clarify. “I can get you an Uber or a cab, whatever’s easier.”

Her face changes then. Her smile reaches her eyes and she looks relieved, maybe even grateful for my kindness.

I rub the front of my neck, up along the stubble beneath my chin I haven’t shaved in a few days. I’m about to tack on Forget I asked when she finally speaks up.

“That would be great, actually. Thanks. I just need to find—”

Her strappy sandal is hanging from a limb of the suite’s chandelier.

She laughs. “Right. Of course. Why wouldn’t my shoe be dangling from the ceiling?”

She moves around the couch to try to get it, but seeing as I’m the professional basketball player here with the height to prove it, I take it upon myself to reach up and grab it before handing it down to her. Her cheeks heat with new color and she tucks her dark hair behind one of her ears.

I nod and walk away, giving her space to finish collecting her things.