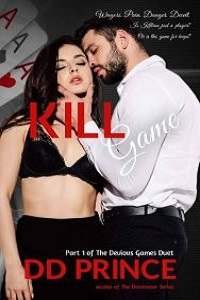 “Yes, I did,” he replies matter-of-factly.

I’m in shock. I can’t process this, especially not with his green eyes cutting through me, showing me what looks like the epitome of I give no fucks.

He has zero remorse. Zero.

“I can’t believe you did that.”

Without hesitation, he replies.

“Believe it. I would lie; I would say anything to protect you. I’ll lie to anybody, you included, to keep you safe. To keep you happy and carefree. To protect you from how I know you feel right now.”

He actually did this.

I’m Violet Rose Gates. I’m twenty-six years old, and I don’t know when I lost myself, but somehow, it happened.

I live with a narcissistic, lazy, abusive man. And I can’t figure out how to leave or make him go. Am I too scared of what he’ll do? Am I just too broken?

How has this become my life?

I have trouble looking into that girl’s eyes because I’ve let her down.

The slow boiling? Things got hotter and hotter, but by the time the water started to exceed 100 degrees, I was already conditioned, accustomed to being in hot water all the time.

I adapted. I changed.

I went from fun-loving and extroverted to quiet and reserved. Because I had to.

I went from chatty and sociable to quiet and timid. I don’t know at which point I began to shrink away, at which point I started trying to be incognito so that I wouldn’t do something to trigger an outburst from him, trigger hard questions from other people.

Over time, I devolved into a wannabe chameleon, trying hard to blend, doing whatever I could to avoid standing out. I try to hover under the radar with everyone, especially him.

I don’t know exactly when it happened, but somehow I lost myself.

I guess it started by me going on high alert whenever Ray was around. Eventually, I became that way with everybody else, too.

I’d go out of my way to avoid his outbursts. They’re always explosive, sometimes verbally abusive. And when a mood strikes him extra hard, he’ll corner me.

He specializes in intimidation. And I’m convinced that bad things will happen if I try to leave. Very bad things. Murder-suicide headlines. Him sending the nudes I let him take of me when we were first together to my parents, posting them on the internet, talking to his friends that are mafia-connected about ruining my parents’ lives – that kind of thing.

He told me the nudes were missing when I asked about them over a year ago, which freaked me out. I’ve torn the apartment apart five times looking for them.

He was drunk one night a few months later and joked that he was holding them in a safe place as insurance in case I try to leave him. He then said he was joking, but I don’t believe him.

The last big fight we had was the end for me; the last of my feelings burnt to ash that night. I just haven’t figured out how to get rid of him. I’m also just… broken. I’ve become this meek, weak person filled with self-loathing.

Our first year together, I fell madly in love with him and was sure he’d someday become the father of my children. Fast forward to year two and every time he’d get in my face, I’d think, “Give me a reason.”

Just do it. Get it over with.

Of course I shouldn’t need a physical cue to leave. Why would I wait until he causes me physical pain when he’s traumatized me to the degree I don’t recognize myself?

My brain knows all this, logically, but somehow I’ve become someone who ignores logic. Someone who has no voice. And if all the other things he did do didn’t amount to me leaving there was a good chance that a slap or a punch might not do it either. I’d probably come up with some excuse. Fear he’d hurt me. Fear he’d release those nudes. Worry that he’d hurt my family, stalk me. I don’t know why it happened, how I allowed it, but he’s systematically broken me. I do nothing. I stay. My life is just… paused.

I’m so angry with myself.

Do I stay to punish myself because I’ve allowed this to happen?

Is it because I know, bone deep, that he will become my stalker, my worst nightmare if I try to go? Why have I allowed him to reduce me to this weak, pathetic person?