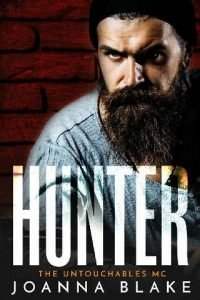 The prison walls loomed, feeling like they were closing in around me. The lace smelled like cheap chemical cleansers and bleach. I exhaled deeply, reminding myself that I was leaving soon. This wasn’t home. I wasn’t the one who got pinched. No, I was here to visit a fallen brother. One who was doing me, and my club, a huge favor. We had people on the inside and the outside. And it was a good fucking thing, too.

I’d fucked around enough over the years to give me a healthy fear of the law. Anybody who fell outside the norms of society knew to steer clear. I’d assumed for most of my life that cops and feds were all assholes with sticks up their asses and huge inferiority complexes.

Connor had changed that for me. And the fact that we’d all worked together to catch a killer made me trust the wheels of justice a little bit more. In fact, that was why I was here today.

“Hello, brother,” I said as Matthew took the seat behind the glass partition and picked up the phone.

He broke into a wide grin.

“You’re looking good,” I said, admiring his new ink. I knew our guys were protected in here. The time they served was cushy, or as cushy as it could be, under the circumstances.

“Feeling fine. And that little problem of yours is under control.”

“Making sure he’s not enjoying his time?” I asked with a chuckle. We made sure the bastard who had killed off our men was not having a moment of peace in the big house. We had friends inside to keep an eye on the man who had taken so much from us.

“Not unless you think he enjoys maggots in his food and getting his ass beat in the shower.”

I couldn’t help but laugh. Shane was the one who had asked us to let him live. I knew it had been hard for him. But he had done it. He had released his hatred. He knew he couldn’t touch his woman again after killing a man in cold blood, no matter how badly he’d deserved it.

I, on the other hand, had no compunctions about killing. Or at least doing some serious damage. So I was here, checking in on our brothers behind bars and making sure the plan to torture the fucker were going according to plan.

“You doing okay? You need anything?”

“Cain has made sure we are in good hands. The care packages are much appreciated,” he said with a smirk. Cigarettes, girly mags, and contraband were frequently delivered by the security guards to our guys. “What’s the good word?”

“You heard Preacher got hitched?”

“I heard. Man, I would have liked to see that.”

“Cynthia is a peach. They have a whole crew up in Portland. You should visit.”

“Couple of years left, unless I get time off for good behavior.”

“I’m sure you’re on your best behavior, you dirty fuck,” I said with a grin. Matthew had taken the heat for all of us back when we were running drugs a decade ago. Cain had put a stop to that. He wanted the club to be above board, or mostly. He didn’t believe in drugs and definitely didn’t think it was worth doing time over. But we looked after our own. All our guys in jail received regular visits and care packages.

“You aren’t getting any, brother?”

I sighed and shook my head.

“I’m tired of the club girls. I don’t need to stick my dipstick in the same waters as every other guy in the club.”

He just shook his head. He’d already served five years. I had no doubt he’d stick his dick in just about anything.

“What’s up with the Raisers? I been hearing things.”

“Doc’s been helping to keep things tight. Shane is still club Prez on paper, but he is more one of us now.”

“Always liked Doc. He stitched my ass up a couple of times.”

“He’s one of us. But someone needs to step in. He doesn’t want it.”

“Please, you were born to lead a club,” he said with a cocked eyebrow. “You’re next in line.”

“I trust Cain with my life. I would never challenge him. I like things just fine as they are.”

“Cain is your daddy,” he joked. But he wasn’t wrong. Cain ran the club with an iron fist. He wasn’t much older than me. I would lay down my life for that man or any of our brothers.

“He rides with us. But they are spending a lot of time away,” I said, feeling regretful about the members who had moved away. Preacher and Shane were gone most of the time, but I knew I could call them if I needed them. It wasn’t the same.