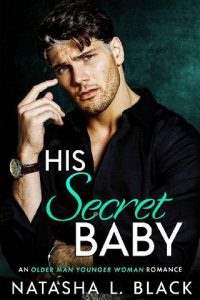 Wicked attraction. A forbidden tryst
A surprise pregnancy I’ll have to keep secret.
He’s here to fix my party girl image,
But it’s not the picture-perfect actor he set me up with
Who’s starring in my wildest dreams every night.
We could never be together.
There’s the age difference,
His ego. My wild streak.
It’s spontaneous combustion.
Sneaking around only makes it hotter!
I didn’t expect to be pregnant with his child,
Never thought I’d want anything as much as I want to have his baby.
Even if he can never know.
Even if this costs me everything.

In other parts of the world, there are two kinds of crisis managers. The kind that handles businesses and the kind that manage people. In LA, though, people are businesses. Starry-eyed kids don’t flock in with dreams of lighting up the silver screen anymore. They have five-point plans and getting their face on your television screen is just step one. It’s a stepping stone to a clothing line in your favorite store, a makeup brand in Sephora, and a home collection in Macy’s. It’s what gets them to the over-the-top network-sponsored wedding to another rising star.

I wasn’t part of the plan. I was the one they called when the plan went to hell. When they got caught on a hot mic, when compromising photos leaked, when they did something that put it all at risk–the career, the clothes, the concealer, the kitchenware, the marriage. My work week was Thursday through Monday because that was when people in this town were most likely to run their reputation into the ground. Drive drunk. Get in a screaming fight in public. Mouth off to the wrong person. And when they did, I was just one phone call away, ready to swoop in and save them from themselves.

But I took Tuesdays off.

On Tuesdays, the shit was still hitting the fan somewhere, but the fecal matter was spraying across a room I wasn’t in. Hitting people that weren’t me. Me, I was on the rooftop of a bar with my four best friends, the same way I had been for more Tuesday nights than I could count. Granted, it was a little different these days. Con had his six-month-old daughter sleeping in a stroller beside his chair. Landon kept checking his phone to make sure his very pregnant fiancé hadn’t called. Julian was still childless, but he kept sliding uncomfortable, guilty looks at the sleeping baby every time he said the word fuck and muttering, “Sorry, kid.”

“She’s six months old and asleep,” Con said the tenth time it happened. “You don’t have to fucking apologize.”

Only my friend Dominic seemed unfazed, but that was Dominic. He treated a baby the exact same way he treated anyone who joined our close-knit circle–with bland disinterest. I personally didn’t have anything against babies, but when Con pushed the stroller a little closer to me and said, “Watch Harper for a minute, will you?” I said, “Fuck no. Give her to Landon.”

“Landon’s across the table, asshole. Watch my kid while I take a leak.”

Reluctantly, I tugged the stroller closer and leaned over to look down at the kid. Women kept coming over to gush about how cute she was, pretending like they didn’t see the wedding band on Con’s left hand. Personally, I couldn’t tell if she was cute or not. Harper looked like a baby, same as any other baby.

The last thing I needed was for someone to snatch the kid when I was on babysitting duty, so I kept a hand on the side of the stroller while I listened to Julian going on about the latest movie he was producing. He was going around the table, making sure we were all coming to his latest premiere. Apparently, it was going to be his best work.

“What about you, Garrett??” Julian asked me directly after the others said they’d be there.

I wouldn’t catch it on HBO. I didn’t like movies, and Julian knew that. They were too boring. Even the mysteries were predictable if you knew how writers thought, and I knew how everyone thought.

“Noemi is the lead,” Julian said smugly, like that would change my mind. He crossed his arms over his broad chest and sat back, waiting for me to backtrack.

I snorted. “You’re inviting me to watch my ex-wife save the world and fuck David Romero? No thanks.”

“Who isn’t fucking?” Con said as he dropped back into his seat and pulled Harper’s stroller close again.

Con glanced at me, eyebrows raised. “Are you monitoring who Noemi fucks?”

“No, I’m just not watching it on a hundred-foot-tall screen. Call me traditional.”

“She doesn’t fuck him. Sorry, kid.” Julian’s eye twitched in annoyance. Hard to say whether he was more annoyed by the baby or me. He couldn’t understand how someone couldn’t like movies. Movies were his life. I could tell that he thought for sure Noemi was the bait he needed to get me into his latest save-the-world-from-imminent-disaster flick.