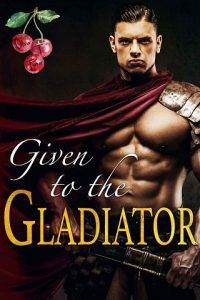 She tightens the corset with a grunt until it’s crushing my ribs.

“Enough, Elovissa!” she snaps. “I will not hear anymore of this. Manius will be a suitable husband for you. He’s the best we could manage and your father has paid a considerable dowry to wed you off.”

“But I don’t love him,” I wince as she tightens the top of the corset, trying to bruise me into submission. “He’s mean and he smells atrocious.”

I want to cry every time I think about tonight. The wedding. Our wedding night after. The things he’ll make me do…

“Please, mother.” The tears are coming out now, sloppy and desperate. “I don’t wish to marry Manius. He’s much too old and he frightens me.”

“He’ll keep your belly full and he’ll keep a roof over your head. Honestly, Elovissa, I am surprised we found anyone in the Roman Empire foolish enough to take your hand in marriage. You have no sense of a woman’s place.”

“My place is not with him.”

“It is!” she snaps as she ties the last string on the corset, officially bruising my entire torso. Manius will remove it tonight to find nothing but black and blue skin. Maybe that will save me.

“Your place is wherever your father deems fit, and he has decided that there is no better match for you than Manius. You will obey us on this, Elovissa, or you will be abandoned and sold into slavery. A daughter who refuses to listen is useless to all.”

“I’m afraid,” I say, trembling as she begins to yank the knots out of my hair.

“Every woman is afraid on their wedding night.” She yanks the brush down, making me cry out. It feels like my hair is being yanked out by the roots. “You close your eyes and open your legs. He’ll do the rest.”

I cringe with a shiver as I picture Manius’ long greasy hair falling onto my face, his rough horrid breath beating down on my lips, his bulbous stomach pressing me into the mattress. The tears start coming hard and fast, streaming down my cheeks as my mother pulls my hair even harder. The tears don’t bring out sympathy from her. Only anger.

“Knock off this pathetic display,” she hisses. “You’re entering womanhood today. Wipe those pitiful tears from your eyes and act like it!”

I wipe them off with the back of my hand and close my eyes, wishing I was somewhere else. Somewhere safe and exotic with someone who loved me. And someone that I adored back. Someone big and scary enough to protect me from the Manius’s of the world.

“Manius has the third largest piece of land in all of Verona. You will not go hungry, so stop complaining.”

It’s not the lack of food I’m worried about. It’s him. I won’t be his first bride.

I quiver when I think of the stories I’ve heard. The young bride from Virunum. Her pretty face and gorgeous blonde locks. She was living on Manius’ ranch for three months and then she mysteriously disappeared.

It was over ten years ago, but the rumors are still as fresh as ever. Some say he drove a knife into her chest, some say he left her out for the wolves, others say he cooked her and ate her. I don’t know what happened, but I’m not looking forward to finding out in the sequel.

My father walks into the room, running his hand nervously through his long beard. He’s always had a softer spot for me than mother did, so I look up at him with desperate eyes, pleading to the protective side that all fathers have inside.

“Please don’t make me do this, father,” I beg. Mother yanks the brush through my hair extra hard. “I am afraid of this man. He ate his last wife.”

Father shakes his head as he runs his hand through his gray beard. “Rumors, my dear. He did no such thing.”

“Then where is she?” I ask, feeling like I’m the only one in this house who can see what is sitting plainly in front of us. “His bride from Virunum? Are you saying she just packed up and walked home?”

“That was a long time ago,” he says as if that explains anything. “You will be wed tonight and that is final.”

My mother has a smug smirk on her face as she grabs the ribbons. “Now stop talking, child. And don’t move your head.”

I think I’m the only bride who’s ever existed who wants to look ugly on her wedding day. I’d love for Manius to take one look at me and shake his head with a resounding ‘no.’

But mother is quite talented in the beauty department and everyone in town who sees me is ‘oohing’ and ‘aahing’ as I walk by. Their smiles quickly fade when they look into my eyes and realize what my future holds.