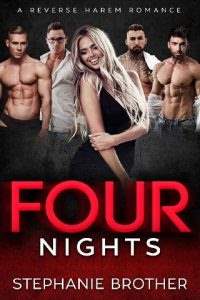 A visit to a strip club starts the wildest four nights of my life. Four nights that change things forever.

In less than a week, I go from having zero experience with men to being teased that I collect them like some women collect shoes.

First, there’s Garrett, my also-inexperienced IT department coworker who offers to accompany me to Club Red because he thinks I’m in need of a protector.

Then there’s Trevor, a performer in the male revue show, whose panty-dropping dance moves are rivaled only by his playful and caring spirit.

He introduces us to Adrian, another dancer so ridiculously good looking that I’d be intimidated if he wasn’t also charming and kind.

At first, the men take things slow with me, but it’s inevitable that I’ll be happily surrendering my v-card if they keep making me feel the way they do.

When Duke, the muscle-bound older guy who guards the club, joins our group, things become nothing short of mind blowing. His take-charge attitude makes me feel safe and protected, especially when my frenemy/roommate pulls a stunt that turns my life upside down.

Despite how well we all get along, we know from the start that our nights together aren’t meant to last. I didn’t think I’d have to worry about falling for them in such a short period of time, but in the lonely weeks that follow, I realize that four nights weren’t enough … I want forever.

Four Nights is the first book in the FOUR After Dark Series, standalone reverse harem romances with characters who continue to make appearances.

“Maybe someday we’ll have your songs on our playlists,” Kelly says as Lindsey taps on her phone to change the music that’s coming through the speaker.

“That’s a bit of a stretch,” I tell my roommates.

“Well, it can actually hurt,” Lindsey says pragmatically, “if you get your hopes up for something you don’t achieve.”

The two of them are a bit like sunshine and rain, but it was very nice of them to throw a little party for me tonight. Later this week, I’ll be playing my very first show, singing and playing cover songs on my guitar, at Rusty’s, a bar here on the island. I’m really touched that they wanted to celebrate my accomplishment.

In addition to the three of us, there are just four other women here, friends of Lindsey’s and Kelly’s that I’ve seen around a few times but don’t know very well. We’re enjoying mixed drinks, eating snacks, and talking when there’s a loud knock on the door.

“Autumn, can you get that, since you’re closest to the door?” Lindsey asks.

I look through the peephole first, and gasp. “It’s a policeman,” I tell the others in a loud whisper.

“You’d better find out what he wants,” Lindsey says.

After undoing the deadbolt and the lock, I open the door a couple of inches. “Yes?”

“Good evening, ma’am. How are you tonight?” He’s a young officer, maybe only a couple of years older than me.

“Fine.” My voice is shaky, and I tell myself to relax. I don’t think I’ve spoken to a police officer since one visited my elementary school for a safety presentation. Even then, I probably didn’t talk to him directly. “Is there a problem?” I ask.

“Yes, I’m here because there’ve been complaints about the noise.”

“The noise?” I can’t help but frown. We’re not exactly having a rowdy kegger. Did we get a new neighbor with superhuman hearing?

“Are you the homeowner, ma’am?” The officer has a thick shadow of dark stubble on his cheeks. He’s probably had a long day of dealing with petty calls here on Four Points Island. The town seems pretty quiet this time of year; summer is a different story.

“No, do you want me to get her?” Lindsey owns the house that we live in, or rather, her parents do, but they’ve essentially given it to Lindsey. The rent I pay goes into her bank account.

“Yes, I need to speak with her, please.”

“Actually, why don’t you come in?” I say, pushing the door open wider.

He tips his head in thanks, and it’s then that I notice the beautiful brown of his eyes. They’re topped with dark brows and are very warm and inviting.

“Lindsey? The police officer needs to talk to you.”

I’m still nervous that we’re going to get in trouble, but my roommate saunters over like she doesn’t have a care in the world. “Yes, officer? Can I help you?” She also sounds flirtatious, but I guess I can’t blame her, with him being as good looking as he is.

“Can you show me where your music is controlled, ma’am?” the office asks her.

She pulls her phone from her back pocket and brings up the app before handing it over to him.

I’m already frowning in confusion, because why wouldn’t he just tell her to turn the volume down, but my mouth drops open when instead of quieting things down, he turns the volume up. Way up. And then he starts swaying his hips with the beat, and lifting his arms overhead, dancing!