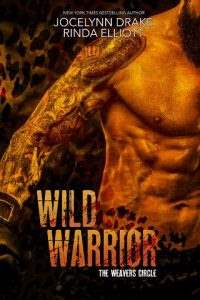 The cool early morning air ruffled Baer’s red hair as he drove along the empty road. Bits of orange, red, and yellow were starting to peek out among the dense green leaves. At this point in early October, fall would be much further along in Colorado. Summer would be a distant memory, and the mountain towns would be planning for their first snow and the start of ski season.

But here in southern Georgia, they were just escaping the brutal grip of summer’s bone-melting heat.

And by some evil twist of fate, he was out at the crack of dawn, getting doughnuts for himself and his “brothers.”

The goddess appeared right after dinner in a pair of bright-blue linen slacks and a floral blouse. They were sitting around on the patio, sipping beers and lazily chatting about nothing at all. Earlier in the day, they’d finished moving his Weaver brother Grey to the apartments over the garage now that Dane was fully settled in the master suite with his mate, Clay. The Soul Weaver needed the added distance to give himself a mental break. His powers blessed him with the ability to hear thoughts and emotions far too clearly and naturally, so he needed a respite from the added noise in his brain.

Flopping down on one of the spare seats, Jo gave her usual warm, loving smile that made her blue eyes twinkle as she brought up that “pumpkin spice everything” was starting to show up in all the local stores. Baer wasn’t an enormous fan of the flavor, but then she started in on these special artisan pumpkin doughnuts that could only be found at this one special bakery in the middle of nowhere.

When she was done waxing poetic on those damn doughnuts, they were all craving them, but none of them were exactly excited about getting up at the crack of dawn to fetch them before they sold out.

Straws were drawn, and Baer was the “lucky” winner.

He should have brought Ruby.

The German shepherd usually liked car rides and she was great company, particularly now that he could understand her thoughts—a gift of being the Animal Weaver. But after letting her out for her morning bathroom break while he made coffee, his faithful companion found a patch of early sun to stretch out in and refused to budge as it warmed her brown and black coat. He was running this errand solo.

Following Jo’s directions, he reached the tiny strip mall in the middle of nowhere without a problem. Along with a gas station possessing just four pumps, there was a beauty salon, a liquor store, and a bakery. As he pulled into the parking lot filled with about a half dozen cars, he was hit with the wonderful scent of sugar and cinnamon.

Okay, so getting up early and the drive were pains in the ass, but he had a feeling it would all be worth it when he bit into that sweet, cake-y goodness. Would two dozen doughnuts even be enough between the four of them?

Climbing out of the Jeep, Baer sucked in a deep breath and stretched his arms above his head. Birds were chirping in the nearby trees, and there was a low buzz from the insects. Cars were few on the road, allowing the peace of nature around him to sink in. After several months, he was getting better with his powers. He could easily dial down the constant chatter from the closest animals to white noise. The only ones he was clearly picking up were a cluster of pigeons sitting on wires nearby, anxiously waiting to see if anyone was going to drop something yummy for their breakfast.

As he rested his arms at his sides, a black-and-white Mini Cooper pulled into an open spot two down from his Jeep. The morning took an immediate positive turn as the most adorable guy stepped out of it. Short and slender with spiky blond hair, the man looked sweet with his dark-rimmed glasses and slightly crooked grin. He was wearing cargo shorts and a T-shirt with Captain America’s shield on the front. Definitely rocking the nerdy-chic vibe hard, and it worked for the stranger.

Those beautiful eyes widened when they looked at Baer, and his pale pink lips parted in a silent O. That was a nice ego boost. Baer was pretty sure his shoulder-length red hair was thoroughly windblown, and he’d just grabbed a plain gray T-shirt and jeans this morning before stumbling down the stairs for coffee. He ran a hand over his jaw to find his whiskers were thicker than he’d preferred, but the charming twink didn’t seem to mind.

Blinking once, the stranger flashed Baer an awkward smile before looking away, a blush of embarrassment painting his cheeks. The guy wasn’t the usual type he fooled around with. Oh, Baer definitely liked all types, but recently he’d been going for the bigger, burlier bears who liked to growl and manhandle.