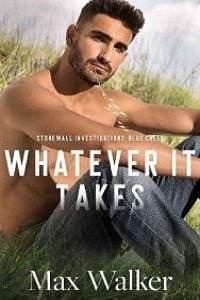 The Stonewall Investigations office was packed, the conference room barely big enough to fit all ten of us. Zane Holden, the owner of the Stonewall detective agency, waved at the camera as his face appeared on the projector. The room quickly hushed the scattered conversations as everyone focused on the boss, his lips held in a tight smile. He seemed like he needed a couple of good nights of sleep, and I didn’t judge him for that. I had no idea what he was dealing with in New York, but here in our picturesque little small town, Blue Creek, we were dealing with a bloodthirsty serial killer targeting queer people, which had led to many sleepless nights of my own.

“Morning, folks, and thank you all for setting aside your schedules to be here. This meeting is going to be a big one.” He clicked a button on his end, and his image shrank to the top corner, the rest of the screen replaced with a case file, a name typed across the center in big, bold letters:

“Beckham,” Zane said. “You’ve been working point on this case—thank you for that. Penny did a great job before you, and she wanted to say that all—and this is in her words—all you jerk-offs are the best and she misses you.” That got a laugh throughout the room. “Beck, I’m sure you’ve already met Jason Quill?”

Beckham Noble turned to me and gave me a dimple-forming grin. “I have, I have. I feel good about handing over the reins.”

Zane nodded, the screen changing to show a brief rundown of the three Pegasus victims. I had already been given most of this information yesterday, my first day on the job, but it was always good to give things a second, third, sometimes even a fourth glance. I learned that during my time working in the FBI, where I helped lock up five different serial killers in a three-year time span.

I didn’t do it alone, but… it didn’t matter. This one I’d be handling by myself, same as I’d done with all my recent cases. I’d left the FBI years ago, and I had no intention of ever going back. I worked as a freelance detective now and enjoyed the freedom it gave me, not having to deal with as much red tape and office politics.

And, well, other things that I’d rather not even think about. It was an ironclad promise I had made to myself, one I’d yet to break:

Never look back. Only ahead.

The promise helped me from steeping too long in what-ifs, which had the tendency to morph into thorny regrets, and I hated living with regrets.

“All right,” Zane began, opening up the file compiled on one of the victims. “Beckham, you want to take over?” A crystal-clear photograph of the man’s dead body took center stage. He’d been sat up against the headboard of his bed and had a knife impaled through his forehead, the hilt made of a spiraling white wood.

Beckham perked up in his chair, setting down the still-steaming coffee mug. He was a good-looking guy, always wearing colorful shirts that brought out the shine in his eyes. ”In the beginning, it was pretty clear we had a copycat killer on our hands. This was almost identical to the way the Unicorn would kill, except the scene was sloppier than most.”

The image changed, showing a bedroom that appeared to have housed a mini-tornado. There was broken glass glittering all over the floor, the dresser was knocked down, and the TV had been thrown against the wall. It was a disaster, and yet somehow, the killer managed to escape without leaving any DNA traces behind.

“It was clearly one of their first kills. The next one was not only cleaner, but the killer’s signature changed. There was the knife in the skull of our victim, Wendy Farstone, but that wasn’t all of the differences we found.”

Another crime scene photo faded in through the last. This one depicted a woman, looking almost peaceful as blood dried in crusted rivers down her face. Behind her, wings had been drawn, using the same blood that served as a mask.

“This was when the Pegasus was officially born,” Beckham continued. “They clearly wanted to differentiate themselves from the Unicorn, and they’ve done that. Not only with the wings, but with their MO, which also changed. The Unicorn only went after queer men, but our current killer opened up that target list from the start.”

Austin Romero, one of the native Blue Creek detectives, spoke up. “Sounds like we’re dealing with someone who doesn’t like sharing the spotlight.”

“Exactly right,” Beckham said, “so keep that in mind when we’re looking at suspect profiles. This person seems to be desperate not only to kill, but to be known for it. They’re definitely trying to send a message.” The screen faded to show the social media profile pages of a crooked-smiling man, a cigarette hanging out of his mouth in almost every picture.