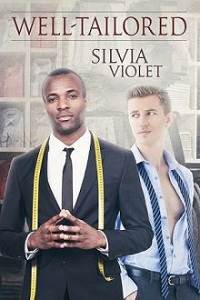 Marc entered Sierra’s Gourmet Ice Cream and glanced around, amused as usual by the unique decor. Not one table was the same color as another, and few of the chairs matched. He was early, so he didn’t expect Riley to be there yet, but he hoped Riley hurried up. He was starving. His stomach growled when he saw the counter filled with ice cream as colorful as the swirls in the stained concrete floor. Sorting through the outrageous flavors with Riley was always fun. Some of the day’s options were salted licorice, almond goat cheese, and blueberry bacon. He was going to need Riley’s guidance, since, as a professional baker and culinary-school student, Riley usually knew which odd combinations would actually work.

Marc ordered a coffee and took a seat at a wrought-iron table by the window. He chose the fuchsia chair; Riley could take the mustard-yellow one. It would look horrible next to Riley’s skin, but that was his price to pay for being—Marc looked at his phone—less than five minutes early.

The door chimed, and Marc looked up, expecting to see Riley. Instead, a slim, red-haired man in a black tank top and rolled-up skinny jeans sashayed in. He had “I’m up for anything” written all over him, so Marc blatantly checked him out. He had a nice ass, that was for certain, and… Right on cue, he glanced at Marc, then turned back to the counter and loudly requested a scoop of Dirty Banana Split.

Marc could give him that all right, and it would probably be entertaining, but not worth the effort. No man seemed to be these days. After putting in his hours each week as an escort, picking up a man at a club and fucking him just seemed like more work. Relationships were worse. Marc was far too prone to fall for manipulative bastards who only wanted him for what he was willing to do for them. Fuck that. Maybe he’d just become a monk, except for when he was fucking clients of course.

Dirty Banana Boy checked him out again. Marc nodded politely and then focused on the people walking by outside, making it clear he wasn’t interested.

The next time the door chimed, it was Riley. He made his way over, slumped into his seat, and let his messenger bag drop to the floor. He looked as tired as he usually did these days.

“Tell me that’s not all you’re getting.” He gestured toward Marc’s coffee.

The very idea. “Never. I was waiting for you.”

“I can’t decide what I want more—ice cream or a chance to sit down for more than a minute without a professor yelling at me.”

How could that be a question? “Ice cream is that answer.”

Riley gave a tired laugh. “It usually is.”

After several moments perusing his choices, Marc decided he didn’t feel particularly outlandish that day. He settled on a sugar cone with a scoop of white chocolate with raspberries on top of a scoop of plain old chocolate.

“And for you?” the server asked, looking at Riley with admiration that signaled she was very interested in his decision and everything else about him. Even dog-tired he could charm anyone.

“I’ll have an espresso float with Bourbon Barrel Dark Chocolate.”

“Thanks.” Riley placed a tip in the jar, and as soon as they both had their ice cream, they settled back at the table.

Marc swiped his tongue over both scoops, letting the flavors meld. “Fucking fantastic. But of course it always is.”

“Mmmm,” Riley murmured. He looked so involved with his float, Marc considered suggesting he get a room or at least a private spot in the back.

Thornwell Shipton was Riley’s very rich, very gorgeous, much older boyfriend. When Marc temporarily moved to California with one of the losers he’d dated, Thorne, who had been Marc’s Friday night regular, became Riley’s client and then so much more.

“You haven’t introduced him to Sierra’s already?” Marc asked.

Riley’s attempt at a glare cracked Marc up, and they both ended up laughing so hard people turned to look at them.

Then Riley’s phone began to sing Peter Gabriel’s “In Your Eyes.” At top volume.

That would be Thorne calling him. The song had been Riley’s ringtone for him since Thorne had acted out the boom-box scene from Say Anything in front of Marc and Riley’s apartment.

Sorry, Riled mouthed as he answered the call.

“Fantastic. I’m feeling as good as I can about everything.” Thorne must have asked about the catering job Riley and his business partner, Susan, were preparing for.

Riley rolled his eyes, and Marc grinned at him. What was Thorne up to now?