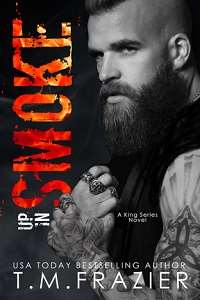 I deal in murder and mayhem.

I crush bones as well as spirits.

I plant seeds from which hatred and sorrow grow.

I’m a man among men, but I’m not really living.

I answer to no one.

I’m what’s left of humanity after it’s burned. After good has succumbed to evil. When lies and lust roam free.

I’m what remains after the flames have been doused.

I am motherfucking Smoke.

Most folks turn out the lights before they go to bed, but not Morgan. For as long as I’ve known her, she’s had this strange habit of keeping her lights on even when she isn’t home. She even sleeps with her house lit up like it’s her job to guide the god damned planes over to the airport.

That’s how I know something’s wrong.

Her house is dark.

I pull my gun and silently make my way to the front door. It’s open. I lean against it with my shoulder and step inside. My boot slides over something slippery. An all too familiar smell singes my nose hairs.

I know the smell of death so well I can decipher the different stages of decay based solely on the stench lingering in the air. With one whiff, I know the death lingering inside is recent.

It’s pitch black. I slide my hand against the wall and follow it until my fingertips hit the kitchen backsplash and I flip the light switch above it.

The house is bathed in bright white light. My eyes take a few seconds to adjust. The white shifts to red.

I’ve seen a lot of shit in my life. I’ve caused my fair fucking share of it, too. But nothing like this. There ain’t an inch of the kitchen not freshly painted in red. It’s smeared across the white tile floor as if someone crawled or was dragged from one side to the other. There’s splatter marks on every wall. Every cabinet.

This was pure fucking evil.

I round the center island, coming to a stop as my boot connects with a slender bare foot. There’s no need for me to hurry over to her; it’s not like there’s any saving her now, but I shove my gun into the waistband of my jeans and race over to the other side of the island anyway. I crouch down over Morgan.

What’s left of her. Every inch of her naked body is twisted and contorted. Her once blemish-free pale skin has been sliced and cut and opened at every angle exposing teeth and skull. Her dark hair is wet with her own blood.

My eyes travel down her battered body. “No,” I shake my head in disbelief. “No!”

What’s left of her once rounded stomach looks like something put through a meat grinder at the butcher shop. “God fucking damnit!”

I stand but I don’t make it to the sink in time, emptying the contents of my stomach around the counter and onto the floor.

I’ve caused my share of death, but even my brutality has limits. I’ve never done something like this. Not to a woman at least. Not to an innocent, someone who didn’t fucking deserve it. For the first time in my entire life the sight of death makes me physically fucking ill.

I steady myself with my hands on both sides of the sink. “Morgan,” I whisper. “Fuck.”

I crouch back down and attempt to cradle her in my arms but her body is so hacked up and bloodied I can’t get a hold on her. Flesh flops from her bones, falling back to the floor.

I lie down next to her, getting as close as I can without touching her. My cheek is pressed to the floor. Morgan’s still-warm blood clogs my ear, soaking through my clothes and skin. I’m surrounded by all that’s left of her. I want it to sink into my bones and stay with me forever.

Morgan is dead. So is our unborn child.

And it’s all my fucking fault.

I’ll be dead within a year.

I try not to dwell on the thought because it makes me crazy. Most days I’m seconds away from losing my shit and proclaiming the desk lamp as my new best friend/Queen of England. Being tired doesn’t help. It’s as if gravity is pulling down on me much harder these days. If I don’t get a decent night’s sleep soon I’m going to start hearing colors.

We all die after all. My death will just be a little sooner than most. Before the wrinkles have set in and old age has me repeating the same stories over and over again.

My eyelids are heavy. I’m fighting yet another battle in the continuing war against myself to stay awake. My elbow slides further and further off to the side of the desk, my chin propped in my hand.