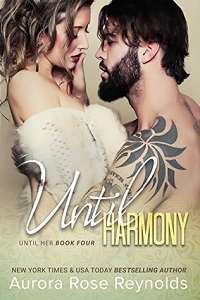 AS I EXIT THE HOSPITAL with a smile on my face, I spot Harlen tossing his denim-covered leg over the seat of his Harley. I haven’t seen him since I took him home from my cousin June’s house a few weeks ago. He had been shot by a guy named Jordan, who was part of an MC out of Nashville. Jordan’s motorcycle club was trying to infiltrate the Broken Eagles motorcycle club and take over so they could expand their business. And by business, I mean selling women, drugs, and guns.

Lucky for Harlen, his wound was clean, through and through, so he was released from the hospital after one day. I didn’t know him before I saw him leaning against the wall at my cousin’s house, not really talking to anyone, but I did know just by looking at him that he was in pain. When I saw that, I went into nurse mode and insisted on taking care of him. I’m pretty sure he thought I was a little nuts, but somehow I still convinced him to let me take him home.

After I got him to his place and settled with some of his pain medication, I left, and I haven’t heard anything from him since. That’s not to say I haven’t thought about him more than a few times since then. He’s been like a constant itch in the back of my mind that I can’t get rid of, no matter what I do.

“Harlen!” I shout his name as I hurry in my heels across the parking lot, watching him kick up the stand on his bike and plant both his boot-covered feet on the asphalt.

His dark eyes come to me over his broad shoulder, and just like the first time our gazes locked, my lower belly pulls tight and my blood sings through my veins.

God, he’s gorgeous, just not in the traditional sense. He’s too scary looking to be handsome. He’s too big, his eyes too dark, and his jaw too hard. The thick stubble covering it makes him appear dangerous. Only, he looks like the kind of danger you want to tame so you can see it up close; like a lion or bear in the wild. You know if you ever got a chance to experience the thrill of touching an animal like that, you’d never forget it. Ever.

“Hey.” I smile once I’m close, feeling my skin warm and prickle as his eyes wander over me in a lazy way before he lifts his chin. Taking that for a familiar scary guy hello, I grin. He didn’t say much to me the last time I saw him either. Mostly, he looked at me like I was amusing.

“Were you here to see the doctor?” I ask, settling my purse higher up on my shoulder as I study him. He looks good; his color is back, and there is no sign of pain in his eyes, which is a relief.

“Not sure why else I would be at the hospital, darlin’,” he rumbles, leaning deeper into his seat and planting his long legs farther apart.

“They take semen all hours of the day,” I reply, watching his lips twitch in amusement, and that same amusement shines in his eyes.

“What did the doctor say?” I ask after a moment of enjoying his expression.

“It’s all good, wound’s healed. Stitches are out.”

“Good.” I reach out and touch his muscular, tattooed arm just under the sleeve of his black tee. His eyes drop to my hand resting on him then lift to meet mine and fill with something that makes me feel off-balance. Dropping my hand away, I take a step back. “I’m glad you’re doing okay,” I say, and he lifts his chin once more.

“What are you doing here?” he questions after an awkward pause.

I smile. “I just had an interview for an RN position.”

“I did.” I smile brighter. I’ve wanted to move home for a while now, but knew I couldn’t until I graduated, passed my state test, and got a job in town. I love my parents, but there is no way I would lean on them or move into their house after being free to do my own thing for so long.

“Feel like celebrating?” he asks, catching me off guard, and my stomach does a flip at the idea of celebrating in any way with him.

“Yes,” I agree without thinking about my answer, and he starts up his bike, the loud rumble making my whole body vibrate.

“Hop on?” I repeat as he hands me his helmet.

“Yeah, hop on.” He nods to the seat behind him and my eyes go there briefly.

“Maybe I shouldn’t.” I shake my head, trying to hand his helmet back to him, but he doesn’t take it. Instead, he crosses his arms over his broad chest, making his already huge arms look even more intimidating.