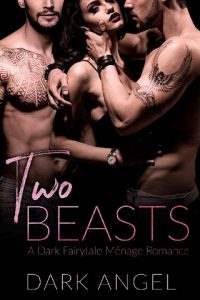 I’d hoped to never marry, but I allowed the Queen to teach me that there could be a suitable compromise.

After all, the Queen is my mother.

I face the mirror again, looking to erase my tension on my face and then in my mind.“I’m Isadora Brevintos, and I have to marry, as I’m the princess of my nation.” I repeat the words, brushing my hair and hoping working the comb through my long strands will help to calm my nerves.

I catch my mother’s image in the mirror, and any relaxation that might have crept over me slinks back and I see my forehead crinkle.

My mother and queen, never one to shy away from war, decided she would keep a peace arrangement in play rather than let tensions rise among the surrounding, powerful nations. “Yes, you will do your duty to your nation,” she says, her mouth forming a stern line. She smiles, an attempt at warmth that doesn’t quite penetrate my nerves. “You look every bit a princess, my child, and this brilliant move will mean so much for our country.” Her eyes beam with pride.

Her hands are resting on my shoulders now, and I reach up to squeeze them for comfort, but she pulls away. I don’t think she realizes she does it as she walks away. The queen is rambling on about duty, honor, and other things that I’ve already intoned to myself, already heard a thousand times.

It’s this coldness in her that I fear I have in myself. Perhaps I’m still a virgin and have no interest in men, because I despise affection like my mother seems to.

My mother had me, but her husband, my father, is no longer with us.

Perhaps it is me who is unlovable, I worry.

It’s a dreadful thought. I hope that it isn’t the case. I hope the two princes I’m arranged to marry do not feel that way about me. More than anything, I hope that they are just as unhappy with this situation and therefore empathize with my hesitance to do certain…things that married people must do.

I’m not ready for any of that!

I finish brushing my hair before the stress makes me brush the strands into a static electric mess, and I stand up.

“Good, you’re ready. I want you to appear eager,” the queen says, and when her eyes take me in, she grimaces. “Smile, you aren’t being led to slaughter.” There’s almost laughter in her voice, but I can’t help notice how it seems to hide…disgust.

I don’t want to think such horrid thoughts about my mother, especially not when she’s bringing a peaceful compromise to a nation I will one day rule. I don’t want war, I don’t want famine.

Marriage is a small price to pay to save untold lives of my future subjects.

I smooth my hands over my brocade and jeweled gown, so lavish that I was afraid to put it on. It took two handmaidens to cinch me.

What if it takes two princes to un-cinch the dress? My face heats at the idea, and I’m horrified.

I keep walking forward, leaving my chambers and heading to the grand ballroom of the palace I’ve always called home. I feel as though I’m in a foreign land, though the princes have both come here in order to agree to wed me. Though there are many customs and traditions that are often neglected in these modern times, it seems none will be when it comes to this arrangement.

I can barely breathe thinking about what little I do know about the different ceremonies. I’m terrified of the betrothal ceremony, and it is the first and possibly least frightening of them all. It doesn’t involve more touching than a holding of hands, if I remember the protocol correctly, and that can’t be so bad.

But then I see them both.

These two princes are stunning in the pictures that I’ve seen, and when I see them in person I know that those photographs do them no justice. They are so attractive that it almost hurts my eyes. Like, I’m saying this, the person who cares nothing about dating and has had zero interest in men. But they are outstandingly, incredibly attractive. Broad shoulders, strong chests, and chiseled abs I can see defined through their shirts. Charming smiles and sensual eyes; even their jawlines are godlike.

My body is utterly betraying me right now, because I feel a dampness in my panties that shocks me. I’m wet. I never get wet, especially not just seeing a man…or two.

Aaaand I’d hoped that we wouldn’t even work on an heir till later. I know that there are ceremonies—not unlike this betrothal ceremony, but GOD, I am going to have to sleep with both of them… Now I’m not too worried about it.