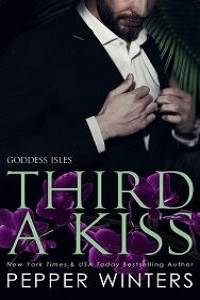 MY LIFE HAD BEEN a series of calculated, risk-tabulated endeavours.

My brother had taught me that.

From my first memory, I’d known spontaneity would get me killed. Laugh, and I might get punched. Speak, and I might get kicked. Drop my guard and forget, and I would almost certainly be punished.

That lesson stayed with me throughout childhood, growing from self-preservation into utmost law. It didn’t just engrain itself on my psyche; it grabbed a brand, stuck it in a fire, and seared into my every cell.

I didn’t do reckless. I didn’t do impulsive. Every step in my life had been premeditated, planned, and controlled.

Until one night, when I’d had a dream about a place called Euphoria. Where a mortal man could fuck any female he wanted. Sky, sea, fiction, or fact. Any illusion, any fantasy, a place where rules bowed to your desires, gravity kneeled to your wishes, and life was no longer full of monsters but magic.

And in that dream, I shared this new Zion with a girl. A girl with long hair the colour of rich coffee. A girl with leggy length, a strong soul, and magnificent quicksilver eyes. A girl who begged me to touch her, lick her, worship her.

And for the first time since I was born, I did something spontaneous, impetuous, and oh, so fucking dangerous.

I let myself sink into the dream. I fell for a figment of my imagination and fucked a goddess I would never be able to find.

When I woke up, I mourned the loss of such a dream. I spent a week wishing I could return to such a place, to find such a creature, to be happy.

But such a place didn’t exist. Such a girl didn’t exist. And that denial of everything that I wanted became a driving force to twist the impossible. Thanks to the scientific gifts I’d learned through methodical education and instinctual evolution, I created an elixir. I conjured Euphoria. I brought forth a new dimension…all thanks to a dream.

But no matter how skilled I was at pulling myth from reality, I couldn’t fabricate the dream-girl who’d stolen my heart.

The goddess I wanted more than anything. The girl who would forever condemn me to loneliness because no one would ever compare.

Euphoria was real, but I wanted nothing to do with it because I wouldn’t settle for a fucking lie. I wouldn’t code a fantasy or change the face of another to indulge in because if I did—if I allowed myself the illusion that she was real—I’d turn my back on reality to stay with her.

So, I allowed others to play in my elixir-explicit playground.

I clung to the lessons my brother taught me.

I stayed iron-fisted, guarded, and restrained.

Until the night I dreamed of her again.

A silver-eyed enchantress who haunted me.

And I typed an email sending out a half-conscious, sleep-hazed request.

Find me a girl with long dark hair, alabaster skin, and silver gaze.

I forgot about such a request until I earned a reply months later.

And I did the second most impulsive thing of my life.

The minute she stepped foot on my paradise, I knew I’d fucked up. I hadn’t believed such a creature existed. I stupidly thought no human girl could compare.

But Eleanor Grace was the one who was incomparable. Instead of ethereal silver eyes, her grey ones were equally bewitching. Instead of glowing skin and the faint halo in my dream, her honesty and spirit were what drugged me.

I’d gambled with fate and lost. I’d asked for something I could never survive. And she’d been delivered straight from my fantasies and directly into my nightmares.

Thanks to her, spontaneity became a disease I couldn’t escape. Rash choices, hasty conclusions, careless decisions. Each one was her fault. Each one broke me a little more. Each one destroyed my sanity.

But then she went and committed the worst thing of all.

She fed me elixir.

She shattered my premeditation. She annihilated my careful control.

She made me fucking wild.

And then, she ran.

A girl I’d dreamed about, thought about, kept on a pedestal inside my mind for years, drove me into the dirt where beasts belonged.

So…I gave up trying to control myself.

I welcomed the pain of chaos.

MY BARE FEET SANK into soft sand as I bolted from Sully’s office.

My dress flared out around my legs, fawn glitter and champagne gems all winking in the sunlight. The heavy material made me trip as I careened around a corner and ran as fast as I could.

Grabbing handfuls of the train, I threw myself into a gallop.

Most of me didn’t want to run.

This wasn’t my plan.