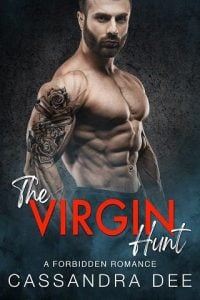 I flop down on my bed in nothing but a towel and answer a video call from my best friend, Corrie.

“Did you just get out of the shower?” she asks immediately, squinting her pretty brown eyes at me.

She giggles, throwing back a handful of curly brown hair.

“You could’ve gotten dressed and called me back, Jem. It’s okay.”

I merely shrug and grin.

“Why bother? You’ve seen me in less clothing. My bikini doesn’t cover nearly as much as this towel, so actually, you’re seeing less than if we were at the pool.”

“That’s a good point,” my buddy nods. “Touche.” But then at that moment her daughter, Nora, climbs up into her lap and giggles, waving at the camera with her chubby arms.

I wave back. “Hi, sweet girl! Aunty Jemima loves you!”

Corrie bounces the baby on her knee. “Nora loves her aunty, too. Say hi, Nor-Nor.” I giggle because the baby looks just like my older brother, Justin. In an interesting turn of events, Corrie fell in love with two men simultaneously: my older brother, Justin, and another eligible bachelor, Cameron. From what I understand, Cameron and Justin were butting heads at first, but now the threesome’s settled into a comfortable little family, and they’re raising a baby girl together. It’s wonderful, and I actually love being a sister to my best friend.

But of course, Nora’s the star of the show.

“Jemmy!” the baby squeals, throwing her hands up while bopping back with her head to smack Corrie in the face.

“Ouch!” my friend squeals while covering her nose. But then, we both laugh.

“OMG, Nora is so cute,” I coo while doing a small finger wave into the camera. “I really miss her, and I need to come visit soon.”

After all, when Corrie got pregnant, Justin and Cameron decided to sell their places in Prescott, Wyoming, and to move to a ranch where they’d have more space. As a result, the three of them live in a huge, sprawling property thirty minutes from town. But they’re not roughing it by any means. Instead, the ranch has every amenity known to man, and my friend’s ensconced in the utmost luxury. But it must be quiet out there because Corrie nods then, her expression earnest.

“Please come and visit, Jem. Justin’s been talking about how you haven’t been around lately, and I know he misses you.”

I raise an eyebrow.

“Yeah, but I had lunch with him like a week ago.”

“I know, but you know your brother. He cares about you.”

“More like he’s worried I’m going to run off to New York City to attend a Sanctum party if he doesn’t keep an eye on me.”

My friend titters while bouncing her baby on her knee.

“Okay, maybe that, but his concerns are valid, aren’t they? I mean, ever since I told you how we went to that Sanctum event, you’ve been really interested.”

My buddy’s referring to a play party she and her lovers attended before the baby was born. It was organized by a super-secret group in NYC called Sanctum which organizes a lot of spicy events. And Corrie’s right because I’d love to find out more, and maybe even go to a party myself. But she’s never gotten into the nitty-gritty’s, which only piques my interest more.

“I don’t know,” I demur. “You haven’t told me much about the party like I keep asking you to. Come on Cor, spill the beans. I know something happened.”

Corrie shifts Nora to her other knee and sighs.

“You know plenty about the party already. I told you about it when we first came back.”

“Yeah, but I feel like you’re not revealing something. My brother too. You guys are so tight-lipped about the whole thing, and why?”

My friend rolls her eyes. “It was a sex party, Jem. I’m not sure how much I should be telling you about that.”

I bounce in my seat with excitement.

“Yes, but that’s exactly why it’s juicy! I mean, extravagant sex parties for wealthy men where everyone’s basically in a big room together hooking up? OMG, details girl, details.”

But my friend stays curiously mum.

“Nothing really happened,” she says in vague terms. “I mean, nothing that you wouldn’t read about in one of your romance novels. In fact, I’m sure those things are plenty spicy right there.”