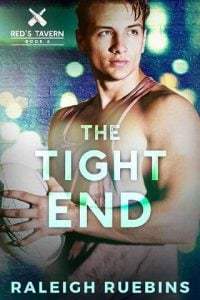 I lay back on my bed, propping a pillow up behind me as I flipped to the next page in History of the Kingdom. I was pretty sure I was the only person on campus doing this tonight, but it was one of the best history textbooks, for one of my favorite classes. I’d been waiting to take Advanced History of the British Empire for four years now, and the textbook was just getting to the good part.

Everybody else was out at a party or club tonight, either with somebody they loved or trying to find somebody to love. My senior year of college had just begun, and fall festivities were already in full swing.

But all I’d done tonight was jerk off alone and crack open a book.

In other words, my usual Friday night.

I slid a finger between the pages of the textbook as I shut it, looking over at the expanse of empty bed beside me. Before the school year began, I’d resolved that this year, I would be bolder. I knew I couldn’t hide behind books, perfect grades, and mountains of homework forever.

Would tonight really have been any better if I had a hot guy here, keeping the other side of the bed warm as I paged through my book?

But it was easier to be alone.

Every time I was around somebody attractive, it was like my verbal brain functioning shut down. It had happened just earlier today, when I’d seen a cute guy sit down next to me in the cafe with a book about Ancient Rome.

But don’t talk too much about ancient history like you always do.

He’s probably just trying to get a history requirement over with and move along.

Sitting here with a big mug of hazelnut cocoa on the table next to me and a heavy, glossy book in my hands should have felt amazing. It used to be my favorite thing, curling up with a good read, unbothered by anyone else. I’d always been able to put my feelings into a box, stuffing that box somewhere deep and far away. Loneliness was something I could deal with later.

But the touch of my own hand was losing its luster. Even when I walked by couples holding hands on the street, the ache in my heart wasn’t so easy to ignore.

I tried to shove the loneliness back into its place, same as I always had. But the box was starting to crack open. It was straining. Set to blow like a ticking time bomb.

Something had to change. But I was still at square one.

Maybe some people are just meant to live their whole lives alone. And maybe I was one of them.

The sound of footsteps and the front door swinging open broke my focus about an hour later. I’d gotten lost in the story of Alfred the Great again, sinking into stories from history instead of thinking about my own life. The door slammed shut and two muffled voices came down the hall. My bedroom door was closed, but I could still hear the sound of deep, drunken laughter floating in from the front of the apartment.

My new housemate was here.

His name sounded like a gay porn star name to me, but I guess it made sense for one of Kansas Midwest University’s hottest football stars, too. Football was king here at KMU, even though I’d never paid two seconds of attention to it. I’d grown up in a house with two professors for parents, and since my mom and dad both taught here at KMU, I’d stayed in my little academic bubble forever. But most people at this school lived for football. The games were always packed, and students all over campus sported the white, green, and gold jerseys all of the time.

Now one of the KMU Wolves was going to be living in the same apartment with me.

My landlord had called to let me know that Brody had signed the lease and picked up the keys earlier today. I had been in my usual spot out at the library. I hadn’t even met Brody face-to-face yet, even though we’d emailed and texted a few times this week before he decided to sign the lease.

I pulled out my phone, navigating to my texts with Danielle.

>>Logan: He’s here. Tell me again why you had to abandon me?

>>Danielle: I didn’t abandon you. I just really, really wanted to live with Henry.

>>Logan: I know. And I’m happy for you, promise. I just have to live with a football player now.

>>Danielle: LOL. You’ll do okay, Logan. It’s just a roommate. How bad could it be?

Danielle was a history major like me. She was a nerd, too, and for years, she’d been my best friend. My only friend, basically. Danielle was the one person who I could totally be myself around, never worrying for a second that she would judge me.