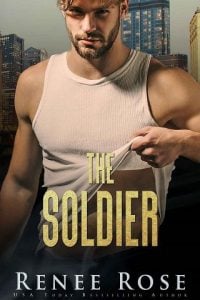 I wrap my tattooed fingers under the deadbeat’s jaw and trace a knife blade across his throat. “Don’t make bets you can’t cover,” I tell him. I sharpened the blade before we came, so just the tickle of it cuts his skin and sends a trickle of blood down his fat neck. Enough to scare him if he’s squeamish. We’re not here to maim the guy, just to make him piss his pants.

Nikolai, our bookie, stands close, arms folded over his chest in clear condemnation. Beside him, Oleg, the enormous, silent enforcer, cracks his tattooed knuckles.

He already worked the asshole over pretty well. The guy will be bruised and swollen for a couple weeks, for sure. That’s what happens when you fuck with the Chicago Bratva.

“Please. I’ll get you the money. I swear.” He’s blubbering now. It didn’t take long to break him, but it was still more time than I wanted to waste here.

Not that my job is a waste of my time. I’m damn lucky to be part of Ravil’s bratva cell.

It’s just that I have someone else to torture after this. Someone far more delectable and willing. But unfortunately, she lives in a different city, which means I have a flight to catch.

I meet Nikolai’s eye, and he shrugs, leaving the call up to me.

I clean the blade of my knife on the mudak’s shirt. “You have two weeks. Pay up or we take everything you love. Understand?”

“You had the money,” I remind him. “And instead of bringing it to us, you used it to place a new bet with the Tacones.”

“I will—I will pay you first. I promise.”

“Don’t think you’re welcome at my table again,” Nikolai says. He takes it personally when players choose to sit with the Italians instead of us. The Tacones aren’t our enemies; we have a tacit agreement to stick to our own specialties when it comes to organized crime in this city. Which means our poker games shouldn’t overlap.

I lift my chin at Oleg, who takes one last swing at the guy’s face for good measure, and then I cut the ropes tying him to the chair. He starts to scramble up, but I point the blade of my knife at his left eyeball, and he freezes.

“Sit. Count to four hundred. Then you leave.”

I pick up my jacket and pull it on as we leave the abandoned warehouse we chose for our little torture session. Pea gravel crunches underfoot as we walk to Oleg’s SUV.

“Not up to your usual quality,” Nikolai remarks as we walk. “You losing your taste for torture?”

“No.” I don’t tell him my tastes have just changed. I’ve found a far healthier outlet for my sadistic urges. I don’t tell him, but he probably already knows. I live with these guys full time. It’s pretty hard to keep secrets although we just found out Oleg kept a huge one about his past from us.

“Seriously, dude. I almost stepped in to throw a couple punches myself.” Nikolai’s still giving me shit.

I glance at Oleg, because the guy communicates more these days, and he shrugs and makes his fist nod, sign language for yes.

We climb into Oleg’s vehicle, and he starts it up to drive us back.

“Ravil’s going to replace you if you don’t start pulling your weight.” Nikolai says it lightly, but a prickle on the back of my neck tells me to pay attention. I’m not sure if he’s just trying to get a rise out of me or if he means it. Ravil is our pakhan, the boss of the Chicago bratva. The idea that he might be dissatisfied with my service puts me on edge. I’m lucky as hell to have this position, and I’m ambitious. I definitely hope to solidify my place for as long as I’m here. That way, hopefully, when I go back to Moscow, I’ll have improved my position in the organization there.

“What the fuck are you talking about?” I snap.

Nikolai twists from the front seat to look at me. “He made a comment this morning about you leaving for the weekend again. Something about you not clearing it with him.”

Still, assuming everyone knew I was going isn’t the same thing as asking permission from the boss. I should’ve thought to ask for his leave, but we’re not exactly timeclock employees. Our job descriptions are pretty loose. Basically, I do whatever the fuck Ravil tells me to do—legal or not.