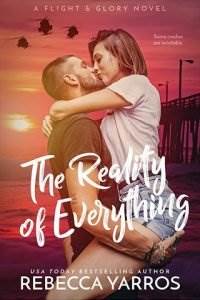 Take the money. Use it. Don’t just give it to charity or stick it in a bank account, Morgan. Spend it on something that brings you happiness. Use it to leave like you always planned. I just wish I were going with you.

Okay. So maybe I was in over my head.

As if the octagon-shaped house agreed with my thoughts, one of the struggling shutters on the third floor gave up its battle with the ocean breeze and came loose with a loud creak.

All three of us leaned to the right, following the slow slide of the doomed shutter until it snapped free, slammed into another shutter, knocking it loose, and finally fell thirty feet to the sand below.

“Let me get this straight,” Sam said, sliding her sunglasses down her nose to peer over the frames at the stilted beach house that—as of thirty-six hours ago—I now owned. “Will left you five hundred thousand dollars, and you bought this.”

“Not exactly,” I drawled. They both turned their heads slowly toward mine. “Will left me a secondary life insurance policy worth five hundred thousand. His attorney invested it until I was ready to do something, and it ended up a little over six hundred.”

“And you bought this,” Sam repeated, her hazel-green eyes wide with disbelief.

“Yep.” Sure it kind of resembled a giant mushroom, but the price had been right.

“I’m fixing it up,” I declared, my voice a hell of a lot stronger than my certainty. That had been one of the conditions of the purchase.

The house groaned, and we tilted our heads to the left as the previously assaulted shutter submitted to gravity and plummeted down the gray-shingled exterior, landing next to its partner like a tombstone in the sand.

“Even the exterior is jumping ship,” Mia muttered from my other side, folding her arms across her chest. As our only Outer Banks native, her appraisal gave me pause. If anyone knew beach houses, it was Mia. She was more than Sam’s sister-in-law; she’d grown up an hour north of here and was currently studying architecture at UNC.

“It survived the last hurricane,” I argued on behalf of the house.

Hence why it had been so cheap.

“It’s not that bad.” My voice pitched a little high. Maybe it was weathered, rather ugly, odd-shaped, and appeared to be falling apart, but I’d been assured that the bones were good.

I received two doses of side-eye from my girlfriends.

“It was bad enough for you to call in reinforcements.” Sam raised her eyebrows. “Not that I’m complaining. I’m just glad I happened to be visiting Grayson’s parents when you called. Plus, it’s been ages since I’ve seen you.”

Guilt pricked me right in the heart.

“It hasn’t been ages. I saw you at your wedding just two months ago.”

“Oh, you mean the half hour you were at the reception before leaving Vegas? You didn’t even say good-bye to Paisley.” Her tone teased, but I felt the underlying worry.

“Yeah, well…” I took a deep breath, searching for the words that had eluded me for the last twenty-two months. How did you tell your best friends that as much as you loved them, you simply couldn’t stand to be around them? Or their happiness? “I wanted to stay, but I…couldn’t.” It sounded lame even to my ears.

And sure, Sam had fallen in love with Grayson, one of our flyboys, while he was in army flight school, but Grayson hadn’t been tangled up in what followed afterward.

It was always Josh and Ember.

Then Paisley and Jagger.

And Sam and Grayson.

I had assumed it would be Will and me…until he was killed in Afghanistan.

The girl I’d been, the one who believed in happily-ever-afters, had died with him.

I didn’t even know the woman I was now—just that she had a fixer-upper beach house and a master’s degree in childhood education and English. The rest of me was a whole lot of empty, and whatever wasn’t empty was pain.

“They miss you,” Sam said softly. “Ember. Paisley. The guys.”

“I’ll get there.” The promise felt as hollow as my heart. “Just not yet.”

“And until then, we get to have you,” Mia offered with a supportive smile.

“And maybe being here will help you heal at your own pace instead of everyone else’s.” Sam’s posture softened, and she squeezed my arm gently. “Why don’t you show us the inside of this monstrosity?”