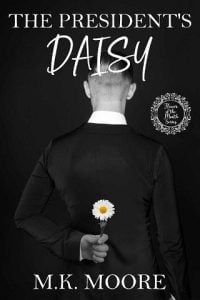 The large conference table in the room will do nicely. On one TV the basketball game is showing. On the other is the House of Representatives chamber. Nothing has started yet, but people are taking their seats.

“Madame Speaker, here now, the President Of The United States Of America,” the Senate’s Sergeant at Arms says on the TV.

“You’ll wait here until President Laurie returns from the State of The Union address, Mr. Anderson,” the aide says, leaving me in an underground room of the Washington Monument. The undisclosed location is actually pretty well known around The Hill. As the designated survivor, I am supposed to wait here until needed. The designated survivor is never needed, though, thankfully. I am the Office of Management and Budget director, which is also known as the OMB. It’s the largest office within the Executive Office of the President of the United States. Long story short, we prepare the president’s budget that gets presented to Congress, and I am in charge of that office. The Senate confirmed me after the president was elected last year. I drew the short straw, so here I am, going through mega-binders line by line for discrepancies. I know that interns could handle this, but as the director, I like to be the last set of eyes to go over it before the president gets it.

I am going over the books as well as listening to the address. President Laurie is talking about how the unemployment rate has decreased in the year he’s been in office. I feel a boom, and the TVs cut out and fall off of the wall. Suddenly all of the doors to the room bursts open at once.

“Director Anderson, we have to move to command central.” The urgency in his voice isn’t lost on me.

“What’s going on, Mitch?” I ask the secret service agent I was assigned earlier today while gathering up my things.

“Leave it. Someone will get that for you. Leave your phone as well.”

I drop my phone on the table and follow Mitch out of the room. “Tell me what’s going on,” I demand again. Whatever it is, it’s something major.

“We don’t know what’s happened, but we lost contact with… well, everyone, sir. We have to get you safe; then we’ll take the next steps.”

I ponder what the hell the next steps could possibly be as I am ushered away from the White House in the backseat of a Suburban. As we drive through DC, I notice fires all around us. They are even into Maryland. What the hell is going on?

We drive through Maryland, Delaware, New Jersey, and Pennsylvania. All of which burns. My thoughts drift to my parents, Barb and Gene, in Brooklyn. They are probably holed up in the brownstone my family has lived in since the 1800s when we immigrated from Scotland.

No one says a word as we speed down the interstate headed for Philadelphia. We pull up to Carpenter’s Hall, where the First Continental Congress met.

“Why are we here? I better get some damn answers this time.”

“This is the only secondary capital still standing; the rest burn.”

“DC?” I ask, looking out the back window, but all I can see are flames and smoke. What the fuck is going on?

“The White House stands, but the rest of the capital is in ruins.”

“What the hell could do all this?” I’m not asking anyone in particular, but damn this is fucking crazy.

“Reports are coming in from all over the country. It’s all the same. No one is taking credit; it just happened. The fires don’t look deliberately set, yet they are burning. Fire crews are able to put them out, but the reports are grim. The death toll is rising.” How can random ass things spontaneously combust at the same time?

“Shit like this doesn’t just happen.” My mind is reeling with all the things it could be, but nothing comes to mind.

“It did. Everyone at the capitol building is dead, sir. It’s confirmed,” Mitch says calmly. How the hell can he be so calm at a time like this?

“What does that mean, exactly?” I try my hand at being calm. It doesn’t sound half bad to my ears.

“You are the President of the United States, Mr. Anderson.” His calm, solemn voice echoes in my head like I’m at the Grand Canyon or something.

The reality of Mitch’s words sinks in. It’s not a job I ever aspired to. as prepared me for this. Certainly not my love of numbers. I was perfectly content with my numbers and binders. Hell, David Laurie had been my friend since college. He was already graduated but came to a frat party. That’s where we met, and we became best friends. Hell, I was the best man at his wedding. He brought me in after he was elected. I made it through the confirmation process because I am a boring bastard. A perpetual bachelor with no children or scandals. It’s been a lonely life. I don’t know how I am going to this country through this crisis, but come hell or high water, I will. I’ll miss him more than I can say.