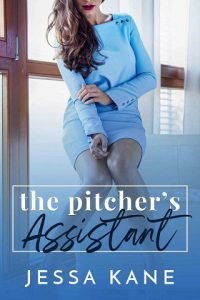 I’ve always wanted to be a baseball reporter.

The very first time my father brought me to an Astros game, I was hooked on the smell of a freshly-mowed ball field. The ripple of cheers going through the crowd and the almighty roar when someone smacks a homer. That afternoon sunshine, the thrill of a night game, even the nasty spitting and cursing in the dugout excites me.

I am absolutely terrible at the sport of baseball—softball, too—so in order to remain entrenched in the sport I love, I chose the closest profession possible to being on the field.

Today is my first day.

With my newly framed journalism degree on the wall of my one-bedroom apartment, I’m starting today as an intern for the well-respected reporter, Randy Carville. The man has been reporting on the Astros longer than I’ve been alive, and fine, he’s a little mean, but every reporter worth their salt has to work their way up through the ranks, right?

I juggle his coat, a notebook and my purse, hurrying to catch up with Randy on the way down the tunnel. It’s post-game and there are throngs of eager reporters attempting to breach the entrance to the holy land also known as the Astros locker room. But there is only one man who has enough clout to pull it off—Randy. Which is precisely why I emailed my resume to him a freakish number of times, begging for this position.

If I want to be the best, I have to study the best.

Randy stops abruptly in front of the security guard at the entrance to the locker room. I narrowly miss running straight into his back and he gives me a withering look over his bony shoulder. With a sigh, he waves an impatient hand at the security guard and the door is opened for him. “Come on, intern,” he mutters at me, disappearing through the entrance.

Squaring my shoulders and lifting my chin, I follow him.

This is it. My first glimpse behind the curtain.

My first time really walking among the giants that erm…uh…

One player, who I recognize as the catcher, saunters by in nothing but a jock strap.

With a yip, I whirl around and face the cinderblock wall.

Oh, Jesus. Jesus. I’ve never seen a naked man before. I’ve never even searched for one on the Internet. Sure, I know where everything is located. Anatomy was a required course in college. But I thought there would be some kind of protocol in place while reporters have entered the locker room. “Mister Carville…can you please let the men know there is a lady present?” I laugh nervously, adjusting the strap of my purse on my shoulder and concentrating on a groove in the wall. “I don’t think they realize…”

Randy snorts, untucking his phone from the pocket of his suit jacket. “I thought you said you wanted to compete with the big boys?”

“You just want everyone to bend over backwards because you’re a girl.”

At least that’s what everyone has always told me, including the guys at school when I politely declined to date them. I am kind of an old-fashioned girl, I guess one could say. When I visit my parents on the weekends, we watch old episodes of Murder She Wrote, bake cookies and do scrapbooking projects. We watch my nephew play little league and cheer from the stands. Baseball has always been a wholesome activity to me. The great American pastime.

I can see that I’ve been a little naïve. Sure, I was prepared to put up with some salty language. But I thought we would walk into the locker room and players would be done showering. It’s not that I’m afraid of the nudity, but I’m the only woman in the locker room and these men are twice my size. It’s intimidating when I’ve never so much as kissed anyone.

Get over it. Do your job.

Wetting my suddenly dry lips, I start to turn around and face the sea of flesh—but I freeze when I see the man coming toward me.

Oh, but he’s not just any man. Not even close.

Yes, he’s a legend and he’s not even retired yet.

Yes, he’s a legend, even though he’s in the middle of a highly publicized slump.

He’s only thirty-three, but he has already broken the record for shutouts. He’s a veritable god in the baseball world. Not only because of his performance and ability to close games like an icy assassin, but due to the mystery surrounding him. He never talks to reporters. Flat out refuses. None of his family members—if they exist—ever attend the games. And while most of the players live in the upscale Houston neighborhoods, Cort Mulloy lives on a ranch way off the beaten path. No one has ever been there. No one has ever gotten an interview with him.