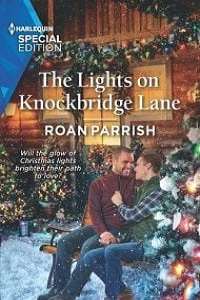 Everyone on Knockbridge Lane had a different theory about Westley Mobray. It was the first thing Adam Mills heard about as he introduced himself around last week, when he and August moved in.

The eight-year-old McKinnon twins next door said he was a vampire. Their parents, Darren and Rose McKinnon, scoffed at that, but said he could be a witch. Marisol Gutierrez three doors down insisted she’d seen him skulking around the neighborhood at night, hunting for animals to sacrifice to the devil. A teenager at the end of the street reported that anyone who looked him in the eyes would be hypnotized, and anyone who touched him would turn to stone. Mr. Montgomery on the corner just said freak.

Westley Mobray was never seen before sunset, though mysterious packages arrived on his doorstep often. He never spoke to anyone and never waved hello. And late at night, the windows of his run-down house glowed an eerie green.

At least, that’s what they told Adam.

So when he saw the man in question through the twilit haze of his own front window—with his daughter in tow—he was understandably startled. Especially since he’d thought she was playing quietly in her room.

He’d slammed two coffees to prevent it, but he’d been asleep. The kind of light, unsatisfying sleep he often fell into when he had a moment of quiet. Which was something that didn’t happen that often as the newly single parent of an eight-year-old.

His insomnia had been pretty bad since the divorce, and worse since they moved back to Garnet Run, where he was the only one responsible for Gus.

The knock at the door jerked him out of that strange sleep, and he scrambled for the door, stubbing his toe in the process, so that when he yanked it open he was biting back the kind of words that he tried with varying degrees of success not to say in front of Gus.

He focused on Gus first. She was all in one piece and was even smiling. It was her I did something bad and delightful smile, but a smile was good—at least when on a child who seemed to have been forcibly dragged home by an irate stranger.

“Where is your coat?” is what came out of Adam’s mouth.

Sometimes he tried to remember what it was like when he talked about things like the composition of his next shot, which restaurant’s tiramisu he preferred, or the latest cozy mystery he was reading.

Now he said things like “Where is your coat” and “Don’t take that apart” and “If you don’t stop making that sound I might have to throttle you.” Okay, he didn’t say the last one so much as think it. Often.

“It’s not that cold,” his wonderful, brilliant daughter said, her lips only vaguely blue.

Adam counseled himself to breathe.

Once he’d determined that Gus was all in one piece and frostbite wasn’t imminent, he turned his attention to the man who’d brought her home.

Westley Mobray was tall and severe, with shaved dark hair and strong dark eyebrows over piercing blue eyes. Those eyes were narrowed slightly, either in anger or—if the neighborhood rumors were to be believed—because he never went outside when there was the slightest bit of light still in the sky, as it would, of course, burn him to ash.

“She broke into my house,” he said. His voice was low and rough with disuse.

Mobray cocked his head as if unsure what that might have to do with Gus’ felonious misdeeds.

“Gus, did you break into our neighbor’s house?”

She squinted and screwed up her face in a way that said she absolutely had. Adam and Gus had a strict No Lying policy, which had resulted in Gus developing a keen sense of words and their exact meanings.

“I didn’t break anything,” she settled on finally.

Adam offered up a silent prayer to the universe that his daughter not end up in prison.

“Did you enter without being invited?” he clarified.

She bit her lip and nodded.

“You can’t do that, baby. It’s not safe for you and it’s not okay to intrude on other people’s privacy.”

She looked down at her toes, the very image of contrition. Then she peeked up at him with a glint in her big blue eyes.

“But he has lizards,” she said softly.

“Okay, let’s get you inside,” Adam said quickly. Once Gus got going on something that fascinated her—and lizards were the most recent addition to that list—she tended to forget any reason why she shouldn’t abandon all sense (or rules) to pursue it.

Adam passed her behind him and looked up at Westley Mobray.

“I’m really sorry about that,” he said.

“She climbed in through my basement window.”

“I’m so sorry. I’ll talk to her. She just, uh, really likes lizards. It started as a dinosaur thing and now... Anyway. Eight-year-olds.”