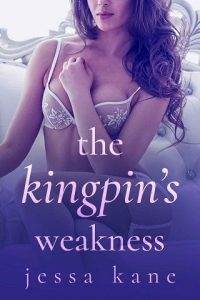 Not a damn thing moves me anymore.

In my youth, I was driven and ambitious. There was nowhere to go but up—straight to the top—and I didn’t care how many bodies I had to step over to get there.

Here’s what no one tells you, though. The top is fucking boring.

Now the only answer I hear is yes. Mainly because people assume their very existence will be in jeopardy if they question my decisions.

I’m at the top now. A kingpin, they call me. Lord and master of this city’s underworld. Money is no longer something I have to work for. It’s my due. Respect has been earned. Fear has been established. No one challenges the king when pain is the implied result. There is nothing else to reach for and I’m colder than ever. Cold and indifferent and moving from one moment to the next like a feather underwater.

Here is the other thing they don’t tell you about being on top.

You lose more than you gain. Especially in my line of work.

A brother. A friend.

Casualties that come from being associated with a dangerous man, such as myself.

A waitress sets down a cocktail to my right, but I stare straight ahead, not bothering to pick it up. Not even sure if I ordered it in the first place. I’m in my private box at the arena, waiting for the MMA fight to begin below. My gaze drops to the crowd at my feet. Men in bloodthirsty packs, beers hoisted, general pandemonium. I own a sizable stake in the federation and I hoped it would amuse me to witness my illegal funds establish something so commercial.

But alas, once again, I am unmoved.

Tonight is a fight between the Maxim Semenov (aka The Madman of MMA) and Banner Kyle, a veteran of the sport who manages to even make my skin crawl. Quite a feat, considering the shit that I’ve seen and done.

I’m drumming my fingers on the arm of my leather chair, contemplating going home and skipping the fight altogether, but something catches my attention on the Jumbotron.

Something flickers in my chest and I suck in a breath, rubbing at the spot. It has been so long since I felt anything, the sensation of my own heartbeat is unnatural.

Front row seats are expensive. Could she be an actress or model?

She’s certainly beautiful enough. But her black-rimmed glasses and the way she turns in a wide-eyed circle have me discarding those professions. No, she isn’t used to the front row. There is something buoyant and innocent about her. Classy. Soft.

I shoot to my feet and advance to the glass, as if I could reach out and touch her image on the oversized screen. Somehow she is the only person in this arena, the only person I’ve seen in years, that doesn’t read as one-dimensional. In a sea of cardboard cutouts, she’s a living, breathing thing and I swear I can almost hear her inhaling, exhaling.

Who the fuck is she?

I pull my phone out of my pocket, surprised to find my hand shaking. Gritting my teeth, I scroll for a moment, then hit the number for my head of security. He answers after half a ring.

“There is a girl…” I have to stop and clear my throat. “In the front row. Dead center of the ring. Black dress. Glasses. Bring her up to me immediately.”

“Don’t take no for an answer.”

I cross my arms and watch my security guard jog down to the front of the arena, just as Maxim Semenov busts through the double doors and thunders toward the ring—and his opponent. Normally I would wonder what has gotten the fighter even more worked up than usual, but I just want the girl up here. I can think of nothing but that.

Part of me hopes she bores me just like everything and everyone else. That way I can stay wrapped up in my cold indifference.

Yet another part of me knows that isn’t going to happen.

There is too much honesty and life and intelligence in her eyes.

I can’t wait to fuck her.

My breath fogs the glass a little and I wipe it with the wrist of my suit jacket, watching as my guard informs the girl she is wanted in my box.