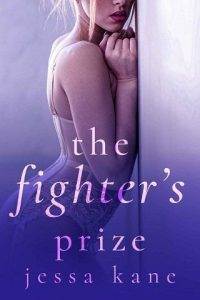 “Are you sure this is going to work?”

I finish applying a layer of red lipstick, giving my reflection a nervous check in the rearview mirror of my sister’s ninety-nine Chevy. “I don’t know. But I have to try.” I replace the lipstick in my purse and slump back in the passenger seat. “Whatever keeps our father from handing me over to Banner.”

My sister, Scout, turns in the driver’s seat, her eyes wide behind thick-rimmed glasses. “Yes, but by all accounts the man you’re planning to seduce is a madman. He might not react well to being played with, Whit.”

My right leg starts to bounce, drawing my attention to the scandalous hemline of the red, skintight mini-dress I bought for tonight’s mission. It’s something I would never wear. I’m more of a jean shorts and T-shirt girl, but to accomplish my goal, I need to ooze sex.

“I’ve done research on Maxim Semenov.” Also known as the man I’m going to charm the shorts off tonight. “They might call him The Madman of MMA, but he doesn’t hurt people outside of the octagon. Only in.” I point to my vagina. “Plus I’m a woman.”

Scout giggles at my antics, but sobers fast. “Okay, let’s go over the plan again.”

“Okay.” I take a deep breath and square my shoulders. “I go into the training gym and play the damsel in distress. Maxim’s protective nature rises to the surface. And once he’s eating out of the palm of my hand, I tell him that if he loses the fight tomorrow night, I’ll be forced to marry the winner.”

“And then tomorrow night, he’ll refuse to lose.”

“It’s a long shot.” Glumly, I look down at my B-cups. “But we’re out of options. I’ve begged Father to reconsider, but he owes too much money to the loan sharks. Banner agreed to pay off the debts if I marry him.” I whine a little. “I don’t get it. Why me?”

Scout snorts. “You’re drop-dead gorgeous, Whitney. You’re also completely uninterested in men. It makes them crazy. This is only way Banner can have you. Bribery.”

“Doesn’t Father care that Banner has been after me since I was sixteen?”

“Obviously not. And now that you’re eighteen, he’s putting the pedal to the metal.”

I fake-gag on my finger. “Gross. What time is it?”

“Okay, Maxim should be in there alone now. Putting in the extra hours before tomorrow night’s fight.” I fan my flushed face. “Wish me and my B-cups good luck.”

With a harrumph, I climb out of the car and teeter on my five-inch heels. I try not to feel naked as I cross the street. But I basically am. If I inhale too hard, my tits are going to pop out. One false move and whoops, there’s my booty. Usually I wear my hair up in a ponytail, but the long, honey-blonde length of it is brushing the small of my back now. I’m grateful there’s no traffic on the road, because someone would probably pull over and ask if I forgot to get fully dressed.

Just as a downpour starts.

“What?” I screech, trying—ineffectually—to keep myself from getting soaked. But it does me no good. I’m drenched from head to toe by the time I dash beneath the awning of Cooper’s MMA Training Facility. Dripping and shivering, I lock eyes with Scout through the car window across the road and mouth what the fuck?

She gives me a sympathetic wince.

“Okay, I can use this to my advantage.”

The plan was to tell Maxim my car broke down and I needed to use the gym’s phone. A ruse that would buy me time to charm him. The fact that I’m soaked to the skin is only going to make me more authentic. And I know all about that. Drama is my middle name.

I’ve been acting in community and school plays since I was tall enough to ride roller coasters. I’ve never had to transfer my acting skills to a real-life situation, but desperate times call for desperate measures. My father has been betting on MMA fights since Scout and I were born and it was only a matter of time before his luck ran out. I never expected him to pimp me out to the meanest, sleaziest fighter on the scene, but I’m starting to learn what people will do when their back is up against the wall.