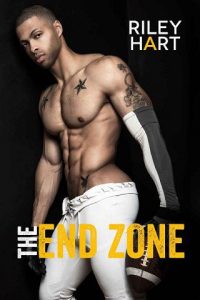 I watched my best friend West move together with Anson, his new husband, in their first dance as a married couple. They’d been together…three…four years? Give or take. I couldn’t say exactly, since part of their relationship had been in hiding. I’d found out by accident one day when I went to see West and discovered a half-naked professional football player at his house.

The bastard. He had all the luck. I was still taking partial credit for getting the two of them together, though. Sure, they met at a hotel bar, but West didn’t figure out who Anson was until he went to a Lightning football game with me. That had been the beginning of all this.

It was amazing to see him so…happy. So fulfilled. West had hidden behind a facade most of his life, showing the world nothing but his smile and his cockiness, but beneath it all, there had been a man who just wanted to be loved. A man who hadn’t felt completely worthy of it.

Anson loved him fiercely, and I was grateful every day that West had found him.

Also, slightly melancholy for myself. Their happiness had made me acknowledge I wanted more, that as much as I loved my husband—well, ex-husband now—I needed more.

It wasn’t anything Bobby had done wrong, per se. If anything, I was the one who’d changed the rules. We’d been content in our open marriage, even though we rarely saw one another because of his travel schedule. It had taken me a while to realize how much I missed him when he was gone, that I wanted us to come home to each other more days than we didn’t, and that I didn’t want to attend special occasions with my friends without him. That I wanted…well, I wanted what West had. I didn’t want to feel alone, which was what it had begun to feel like.

Bobby was still one of my closest friends and always would be. I didn’t blame him. Sometimes things just changed, and they had changed for us. That was a consequence of living and growing.

When I heard West laugh, my gaze found him again. They both looked gorgeous in their white tuxes. Anson was smiling, West’s head dropped back, enjoying whatever it was his husband had said to him.

I looked over, already knowing the deep voice belonged to Darren Edwards. He was the quarterback for the Lightning and Anson’s best friend. Darren and I had walked down the aisle today together as West and Anson’s best men. Anson’s brother, Elias, had performed the ceremony. “Sweet enough to make me nauseated,” I replied, which earned me a raspy chuckle.

I let my gaze travel up and down Darren as he sat down. He was straight, but a guy had a right to look. He was tall, over six feet. Lean muscle that I knew was ripped as fuck under the shirt he wore. His sleeves were rolled up to his elbows, showcasing his thick forearms—more muscle wrapped in warm, chestnut skin.

Fuck. Why did he have to be straight? I could use a distraction.

“I got something on my face or what?” he asked.

“No, just lamenting how unfair it is that you don’t like men.” I hoped he wouldn’t take it the wrong way. Even though I was close with West, and Darren was with Anson, I didn’t know Darren very well. I moved back and forth between San Francisco and LA—well, it would be San Francisco only now. Bobby had stayed in LA mostly, but over the years, he’d been there even less and rarely made it to the Bay Area. I traveled to Atlanta fairly often because I’d gone in on You Belong, the queer alliance center that was West’s dream. I still wasn’t sure why I’d done it. We’d planned on having a California office, but that hadn’t materialized yet. Maybe I’d needed a change long before I’d realized it.

“Hello? Earth to Jeremy.” Darren waved his hand in front of my face.

“Just that it makes sense. I drive the ladies wild, so looks like some queer guys might be the same.” He winked, then sobered. “Shit. It’s okay to use that word, right? Anson does, and I hear it when I help out at the center sometimes.”

His concern was sweet. “It’s mostly okay. It’s been reclaimed, but it still carries a lot of pain for some people.”

“Fuck. Sorry. I have a habit of sticking my foot in my mouth.”

“You’re okay saying it around me.”

He grinned. “So then back to you thinking I’m hot…Don’t you have a husband?”

It showed how often Bobby and I were together that Darren had never even met him. Disappointment flooded my chest. Our decision was the right thing, I knew it was, but I still hated to…well, fail at something, and that’s what divorce felt like. “I did,” I admitted before taking a drink of my whiskey. “Signed the divorce papers before getting on the plane for Atlanta.”