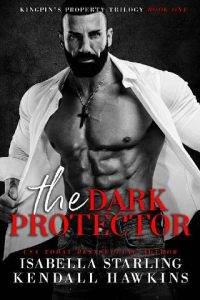 It’s been three weeks since my most prized possession became a part of my everyday life.

Tallulah may have only been here a couple of weeks, but she’s already leaving a mark on the house. The maids love her, and she’s quickly charmed the guards, too. Her sweet nature coupled with the slightly protective side she wakes up in everyone means she’s become everybody’s favorite. And I’d be lying if I didn’t admit it makes me fucking jealous as hell.

Every time I catch a guard glance at her, I fight the urge to rip out their eyes out of their sockets just for daring to look at her. My jealousy is making me distracted. I’m slacking on work, not seeing things straight in business. But I already can’t imagine a life without Tallulah in it. I should’ve taken her from her parents a long time ago.

I never think about Rain anymore. The woman who used to have permanent residence in my mind has been long forgotten, replaced by Tallulah’s innocent beauty and naivete. I’m becoming addicted, more and more so by the second. Every flutter of her lashes, every time she purses her lips, the way she tucks her hair behind her ear when she’s nervous... It’s all enough to make my knees weak.

“Don Xavier, do you have anything to add?”

I look up from the glass of amber liquid I’ve been inspecting as if the answer to all my problems lies at the bottom of the expensive crystal. My business partners are waiting, their eyes following my every move in anticipation of my answer. And yet I don’t even know what we’re talking about.

“Distracted there, Don Xavier?” Saul asks me, his lips curling up into a sly smirk. “Must be that ward of yours.”

“Watch your fucking mouth, pendejo,” I hiss, throwing him a warning glare that shuts his insolent mouth instantly. “Don’t talk about her.”

“Well, the fact of the matter is,” Saul carries on. “She certainly seems to distract you.”

“Then pick up some of the slack yourself,” I hiss at my right-hand man. “I’m not here to do all the small shit. I’m here to run this cartel the best way I know how. By teaching the other motherfuckers in this business not to mess with us.”

“Speaking of which,” Saul mutters, running a hand through his dark hair. “These death threats concerning Tallulah...”

“Get her name out of your mouth.” The words leave my lips in an over-exaggerated growl. I feel pissed at the mere thought of someone else thinking or mentioning my ward. My possessive nature is coming out to play yet again. “Or I’ll cut out your fucking tongue.”

“Regardless of that,” Saul hisses, with a disappointed look at me. “An actual threat came in. We received it this morning.”

He tosses a black envelope at me and my eyes narrow as I inspect the writing on an equally morbid card. It’s written on a typewriter, with white ink. I inspect the envelope and the card itself. The message itself is simple - Tallulah’s name with her birth year and this year, like an epitaph. I crumple the card between my fingers.

“We hadn’t checked it for fingerprints yet,” Neo mutters apologetically.

“You know who it’s from?” Cristiano stares me down, hard. “Care to share with the rest of the class?”

“No,” I mutter. “It’s enough that one of us knows. And speaking of which, this meeting is over.”

Ignoring the muttered protests of the men who work with me, I motion the guard who accompanied to signal we’re leaving. The man walks me downstairs where my car is waiting, opening the door for me. I ask him to sit in the back with me. If he’s surprised by it, he doesn’t show it, just nods politely and climbs into the backseat where my dark gaze penetrates his.

“I need you to find someone young and very capable,” I continue. “I have a very specific person in mind. He needs to be strong to handle a weapon. I don’t want him to be associated with any of the other cartels.”

“Of course, Don Xavier,” Julio mutters politely. “Is there a particular job you’re recruiting for?”

“Yes,” I hiss. “He’s going to be Tallulah’s bodyguard. I never want his eyes off her, and I don’t want to risk the guy falling in love with her, either. Can you find someone?”

“Of course,” Julio smiles shakily. “I might have someone in mind already.”

“Good,” I reply. “Bring him to the house tonight, and I’ll see if he matches the brief. Good job, Julio.”

I affix my gaze at the landscape changing outside the window of my vehicle, signaling that the conversation is over. I’m too busy, my mind swimming with thoughts of this mystery person making death threats against the person I want to protect most in this world. I’ll let nobody harm a hair on Tallulah’s head. And not just because her father would slit my throat if I did... Because I feel more for my ward than I’m willing to admit.