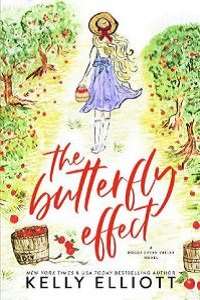 I sat in the kitchen, daydreaming about the one person who seemed to always take up the spare space in my head.

If you looked up handsome in the dictionary, you’d see his picture under the word. Such a clichéd thing to say, but it was true. Dark brown hair and gray eyes that changed colors depending on his mood, the color of his shirt, or even if the sky was blue or cloudy. He had a body that should have belonged on a twenty-something-year-old instead of an eighteen-year-old. My older sister once said Aiden had hair that made a girl want to slip her fingers through it and see if it was as smooth and soft as it looked.

There was more to Aiden than his good looks though. He was kindhearted and would do anything for anyone if they asked. Aiden was smart. Very smart. Out of almost one-hundred kids in his graduating class, Aiden was on track to be the valedictorian, and I had overheard my mother telling my brother, Hunter, that Aiden could go to any college he wanted.

That wasn’t the path Aiden desired though. He was set to join the Navy right after high school, just like his daddy had done and his granddad as well. Aiden wanted to be a SEAL, and it was all he ever talked about. My brother, who was best friends with Aiden, had also thought about joining until our father was diagnosed with prostate cancer during Hunter’s junior year of high school. Hunter didn’t have the heart to leave, knowing things would be up in the air with the family orchard.

Boggy Creek Valley Apple Orchard. It was my father’s pride and joy…well, besides his three kids. My family owned one of the largest apple orchards in the United States. It had been in my father’s family for four generations and had started off with a few apple trees and a dream. Now? Two-hundred-and-fifty acres of trees and more than thirty-five different varieties of apples. My favorite was the Pink Lady, with my father’s and the rest of the Turner clan preferring Gala.

Lacy said I just had to be the different one.

With our father’s health unknown, Hunter had recently made the decision to not go into the Navy with Aiden like they’d originally planned. They were like brothers, and Aiden spent more time at our house than he did his own, especially after his father had died a few years back in a car accident. Aiden’s mother, Rose, was good friends with my mother, Mary, and she had leaned on our family a lot after the death of her husband.

Aiden’s grandfather owned a construction business in Boggy Creek, and his family had built most of the buildings around town. Most dated all the way back to when the town was founded. Aiden’s father had left the Navy to help his father run the business, and when Aiden had declared that he didn’t want to follow in the footsteps of the previous O’Hara men, his grandfather had given him his blessing to follow his own dreams. Aiden had promised him he would return to Boggy Creek someday to take over the family business. But he needed to pursue his own path until then.

My thoughts were interrupted by my sister when she walked into the kitchen and grabbed a box of Fruity Pebbles. She promptly poured some into a bowl and started to eat.

“I still don’t understand why you don’t use milk,” I said, before taking a bite of my oatmeal.

Lacy shrugged. “I don’t like it when it gets soggy. It’s gross.”

I laughed and went back to eating my breakfast as I stole glances toward the doorway.

When I focused back on my breakfast and my sister, she was giving me a once-over, a giant smirk on her face.

She gave me a half shrug. “Baby sister is growing up. Do you have makeup on, Willa?”

My cheeks felt hot. “A little.”

Lacy winked. “You look beautiful, and I swear you grew up over Christmas break. The boys are going to stumble over their own feet when they get one look at you.”

I laughed and shook my head. There was only one guy I wanted to have look at me.

I was three years younger than Aiden, but that didn’t stop my lustful feelings for him. I wasn’t really sure when he had turned from my older brother’s best friend into the boy I had fallen head over heels for. He often had a starring role in my dreams, and I wanted Aiden to be my first. The man who would take away my innocence. High hopes for someone whom Aiden clearly thought of as his little sister. He hadn’t really paid much attention to me over the years, except for the occasional pat on the head, or an invite to go to the pond on his folks’ property.