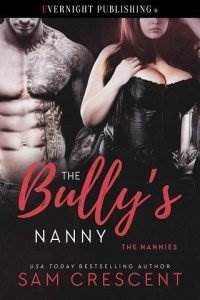 “I’m not going to hire just anyone to look after my kid,” Drew Gold said, glaring at his older brother who simply sat on the sofa, looking bored. Of course, Callum Gold would be bored. The guy wouldn’t know or understand complications if they hit him in the ass. Then again, Callum had also married his childhood sweetheart and they had five kids, and his brother was only five years older than him.

“I’m not telling you to just hire any woman. There’s a service. It’s the best in the country.” Callum produced a card from inside his jacket pocket. “I’m not offering you a substandard service here. I’m offering you the best of the best. They’re amazing. I’ve even been in touch with a couple of their clients who they recommend and have offered to give advice. Try it out. There’s a nanny in most areas, and they’re all vetted.”

Drew took the card and stared at the business name. “This is a bad idea. I’ve seen all those horror shows of what it means to have a woman you don’t know in the house.”

“Don’t be so sexist. In this day and age, you could be getting a guy and maybe he could whip this place into shape.”

He didn’t need to look around to know what his brother was talking about. Clothes were everywhere. The dishes had also started to pile up. Being alone with a four-year-old child was hard. The temptation was there but he’d never been one to admit defeat. When his chances of being in professional football were lost to him after a busted kneecap, he’d gotten his head down and studied hard at law. He’d gone from college football to an academic scholarship.

“No, Drew, you really can’t. Look, I get it. All of your life you’ve always achieved everything you’ve set out to do. You’re a great guy. You think you can conquer the world, but you can’t. Not with this. You have to face the facts. Tilly’s not coming back, man.”

At the mention of his ex-wife’s name, Drew wanted to hit something. He didn’t.

Meghan, his little girl, slept soundly in her bedroom.

“I know she’s a sore subject.”

“Drop it, Callum. I mean it. I don’t want to listen to any of that…” He wanted to curse but seeing as his little girl was at the age of copying everything he said, he’d had to stop.

It wasn’t good when your four-year-old started saying things like, fuck, shit, crap, and asshole on a regular basis.

“If it makes you feel any better, I’m doing this for my own personal reasons. You’re one of our best lawyers, Drew. All those years of studying and you shouldn’t be here, rotting away.”

“Taking care of a kid is not rotting away.”

“You’re pissed. Embarrassed. Ashamed. Whatever the fuck you want to call it, Drew. It has to stop. Call the number, interview whomever they refer, find someone, and get back to work. Don’t make this where you end up. Not because of … her.”

Callum got to his feet, buttoned up his jacket, and made his way to the door. The moment he opened it, Drew nearly had a panic attack. “Don’t slam the damn thing. She hasn’t been down long.”

“The fact you haven’t slept in days, maybe even months, and you’re afraid of a little noise, tells you how much you need this.” Callum closed the door silently.

He wasn’t about to tell his brother he slept when Meghan slept.

After pulling the baby monitor out of his back pocket, he placed the signal to open up the camera within the room.

Kicking off his shoes, he collapsed to the bed, putting an arm over his face. He didn’t need to think about a nanny or anyone else right now. All he needed right now was to sleep, to not think.

What the fuck did you do, Tilly?

He hated the woman who’d been his wife. She’d been the head cheerleader in high school. The one most of the boys in the team had screwed. Tilly had found it fun to pit player against player, but he hadn’t played the game.

Then one drunken night four years ago, he’d made a mistake and paid the price for it. Not that Meghan was too high of a price. She was everything to him. He’d never wanted to have children and much to his shame, he’d asked Tilly to get rid of it when he first found out.

After talking with his brother, he’d ended up marrying Tilly. It had been a rush wedding. He hadn’t wanted to marry her, and he’d wanted to wait until after the baby was born. The moment Meghan was born, he did get a paternity test done, and it had confirmed she was in fact his.