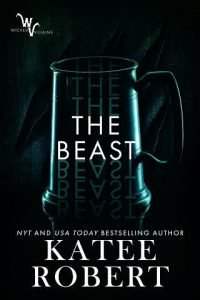 We have to do something.

For the good of the family.

My sisters’ voices ring in my ears, even hours after our conversation. I stand on the curb and stare up at the building before me. It looks nearly identical to those around it: a nondescript gray square reaching into the sky as if it has every right to be there. It’s not remotely the same. No, this place arguably holds the most power Carver City has to offer. Neutral space. Every territory leader has an open invitation to come and go—for a price, of course. My eldest sister has been here a few times, but I’m strictly forbidden from attending.

Or I was before my father died.

It’s been months, and the grief still clings to me like a second skin. During my darkest days, I wonder if it won’t cling forever. My father was supposed to live for decades yet, to pass power to his daughters and retire to do whatever powerful men do when they’re no longer running a territory. He was fond of saying he’d like to spend his last days surrounded by dogs and grandchildren.

It won’t happen now. Cancer took him and there’s no getting him back.

I have to close my eyes against the cascade of emotion. I don’t want to be here, walking into the devil’s den. I’m not the leader like Cordelia. I’m not the genius like Sienna. I am simply the youngest. The woman who never quite grew up, the one who values her personal freedom above all else. My sisters were always destined to hold positions within our father’s organization. I was allowed to find my own way. Up until my father’s death, I believed that way would lead me on countless adventures and travel across the world. To freedom.

That’s no longer an option.

The first step is the hardest: to keep moving toward the fate I want nothing to do with, to not turn and run until I’m somewhere far from Carver City and the chains my sisters are asking me to encase myself in.

Inside, the facade of normality continues. I step into the elevator and take slow breaths that do nothing to calm my racing heart. I don’t know if I can do this. It seems simple enough from where my sisters sit. Our two most formidable generals have left us and are making no plans to return. It’s imperative that they stay, so we will do anything to ensure it happens. Simple.

Except it’s not simple at all. Not for me.

The elevator doors open and I step into a room that’s my first indication I’ve left the real world, such as it is, behind. The room is uniform marble, giving the impression of being unmoored. The only furniture is a single desk, and a beautiful Black man sits behind it. He looks up as I approach and gifts me with a smile that seems to brighten the room. “Welcome back to the Underworld, Isabelle Belmonte.”

Of course he knows who I am, even though this desk sat unmanned the only other time I came to the Underworld. Being the daughter of the so-called Man in Black is enough to make me a strange kind of famous. I give him a practiced smile even though all I want to do is turn around and leave. “Thank you.”

He rises gracefully and motions to the large black door dominating the wall behind him. “Since it’s officially your first time, Megaera will need to speak with you before you engage in any activities.”

Activities. Such a mundane word to encompass a very un-mundane topic. I know what goes on here, of course. Everyone in Carver City does. Power and kink and sex. The thought thrills me even as my palms go clammy.

I had wondered if Hades would acknowledge our very short, very ill-fated meeting several weeks ago. From the front desk man’s greeting, he is. I don’t know if that’s a good thing or a bad thing. I came here before looking for some insight into our problem with Beast and Gaeton, but Hades gives nothing away for free and I’m not desperate enough to make one of his infamous deals.

If tonight goes poorly, I might have no other choice.

I nod at the man at the front desk, keeping my expression locked down. “Is Megaera available now?”

Another of those beautiful smiles. “She is. Please go ahead.”

Approaching the giant door feels like approaching the entrance to the Underworld in truth. Once I cross this threshold, there’s no going back, which is fitting because there wasn’t any going back from the moment my sisters sat me down and laid out what will happen to us if Gaeton and Beast leave permanently. More intense skirmishes with our borders. Maybe even war, if it comes to that.

I’ve just lost my father. I will do anything to ensure my sisters stay safe. Anything.