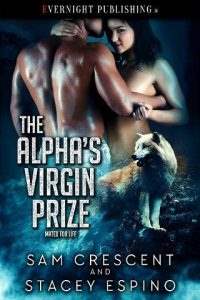 “It can’t be that hard to find a woman for him,” Reese said.

“Really? The guy would rather spend the entire day cutting logs than finding a woman,” David said.

“We’ve got to do something. It’s not healthy for a man to go without a woman. I mean, how does he not want to have a woman he can fuck and fill with his babies? I know I want it,” Brian said.

Caleb heard his men and knew they were desperate for him to find a mate. The curse of the wolf meant only the alpha could find a mate first. Until then, the pack had to wait to find their true mates and live happily ever after. It also meant they couldn’t have babies. To a wolf, an heir was everything. All of his men were desperate to mate, to breed. Not that he blamed them. He got it, he really did.

Having a woman was high on his list once upon a time, now, he just wanted to continue cutting his wood and not living in a land of fairy tales. He’d hit the big forty not long ago. Wouldn’t he have found his chosen mate by now? Caleb was tired of wolf lore and the idea that one perfect woman was out there for him.

After lifting his axe, he brought it down on the wood and it came apart. He didn’t need the axe. With his unique strength alone, he could go around tearing pieces in half, but then he wouldn’t be able to feel normal.

He was a strong wolf, but for some odd reason, the fates had decided to grant him an even bigger burden. According to the gossip, he was a monster, an abomination because of his sheer size and strength.

In his old pack, he was feared, even when there was no reason to. He’d been a large child, strong even before his transition. The moment he first turned into a wolf, everything had changed.

Within two months, his alpha had cast him out. He’d deemed him too much of a risk. For such a young alpha, he wouldn’t know how to properly manage a large pack. Of course, he’d been frightened. Eighteen years old, alone, and lost in the world. There hadn’t been anyone to care for him, to help him understand all the hungry cravings. From food to sex and everything in between. After two years of living from town to town, doing odd jobs, trying to curb all of his cravings, he’d finally been able to be free. Only this didn’t always feel like freedom.

There were times he couldn’t believe that had happened twenty years ago.

Finishing with the wood, he turned to the three men at his back. They should be paroling the perimeter. Rumors were flying that bears were making an advance on all wolf packs. He’d yet to encounter a bear nearby. He’d dealt with a coyote who lived a few miles down-stream, a rather pleasant man, even if he was a little eccentric, constantly talking to himself. He liked him.

“Are you girls finished watching?”

“We’ve heard of a storm coming, Alpha,” Reese said. “We need to head into town for supplies.”

There was no storm. “You mean head into town where all the females are. You’re hoping I’ll take a chance with one of them.”

“What harm would it do?” David asked.

“I’ve been to town many times. I’m telling you there’s no female destined to be mine. This is getting old.” He also didn’t want to delve into all the trouble women could cause. He wasn’t in the mood, not today. Was he growing old and bitter? He didn’t give a fuck.

He couldn’t criticize them and their need to find a woman of their own. They also wanted to have children. He was constantly holding them back. In their view, he was punishing the entire pack by not mating. But it wasn’t about choosing just any woman, it was about finding his fated mate.

“Fine, fine,” he said. There was no harm in giving his men what they wanted.

He placed the axe next to the tree stump and pulled off his gloves.

“Are you going to change?”

“Not a chance,” said Caleb.

“Then the woman who’s going to be mine better get used to me being dirty. I’m not changing, not for anyone.”

He walked into the house, well, it was more than a house. This place had ten different rooms. He took the master bedroom on the top floor with the amazing view while his pack had their own rooms. They were a small group but fierce nonetheless. He hoped their pack would have grown by now, but four was still fine by him.

In their own way, they were all outsiders. All outcasts and drawn together to bring one new pack together.