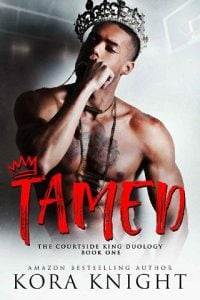 Breck’s lips quirked into a lopsided grin. Holding his phone to his ear, he shook his head as he came to a stop at a traffic light. “I’m actually gonna have to pass this time.”

“What!” Ned protested, a reaction Breck had anticipated. It was tradition for the four of them—Breck, Ned, Tad, and Jay—to party on the very first weekend of every school year.

And in Ned’s defense, this one was especially important. They’d be going out as non-freshmen at George Mason University, having triumphed over their first year as the lowest on the totem pole. So now, in essence, they weren’t just celebrating the new semester, but the fact that they’d be attacking it as sophomores.

“I know,” Breck sighed, shaking his head. “But I’m moving into the frat house this weekend and tonight’s the initiation.”

“Ugh,” Ned groused. “Can’t you tell all your Kappa Theta Sigma butt buddies to do it another time?”

“No,” Breck laughed. “I cannot. And after living in a dorm for the last year, no way am I gonna risk losin’ my shot at a bed in this place instead. Besides, these are varsity bros I’ll be rooming with. Varsity. A destination I will reach, even if it kills me. And getting in tighter with them can only help speed up the process.”

Ned grunted. “You and your ambitions. Seriously. You’re making me feel like a loser.”

Breck grinned as the light turned green. Stepping on the gas, he continued on his way. “Nothing wrong with your destination, my man. You’re gonna kill it. You know this. I know this.”

“I really am.” Ned’s confident smile was almost palpable.

He was going for a degree in computer engineering, his sights set on a career in game design. Not that he spent his days in front of a console. Hell, he was as active as Breck in his own right. Ned’s ‘court’ was very different from Breck’s, though, with a much higher risk of serious injury. Ned might’ve been a wrestling boss in high school with Tad, but these days the guy kicked serious ass in parkour. A passion he planned to take to the gaming world.

Breck nodded and took a right. “So anyway, wish me luck. It should be an interesting evening.”

Breck laughed. “Alright, I’ll be sure to adhere to your guidelines.”

In truth, despite his calm front, he was nervous. Fraternities were notorious for their initiation rituals. The last thing Breck wanted was to end the night in a hospital. Getting his stomach pumped. Or shit, his skin grafted back on.

“You better,” Ned pressed. “Don’t make me have to storm your little brotherly squat spot tomorrow to kick some b-ball bitches in the nuts.”

Breck’s grin quirked up all lopsided again. “Now that’d be fun to watch.”

Ned was showing love in his typical macho-man way, and Breck appreciated that shit. He truly did. Because he loved that randy little fucker, too. Out of the four in their posse, he and Ned were always the closest. Jay was good people, but he was annoying as much as amusing. And while Breck adored Tad, the levelheaded one that kept them all grounded, Ned just seemed more on the same wavelength. Able to complement Breck’s vibe in all the right ways. That they both drank and fucked too much probably had something to do with it.

But hey, life was short. And indulging was fun.

Pulling up to the curb of his potential new abode, Breck parked his Nissan Altima and climbed out. He didn’t trust the hooligans in this neighborhood, so locking things up came next. His baby, all sleek and black, was brand new, after all. A gift from his parents for making it through his first year of college. With killer grades to top it off.

But to Breck, his car was just another step toward total autonomy. He’d go home to visit his parents when he wanted to, not when they swooped in out of nowhere to cart him away.

Not that he anticipated going home very often now. The weekends at college were just too fun. His closest friends were with him, after all. Why on earth would he ever want to leave?

Sorry, Mom and Dad. I love you and all but… yeah.

He really truly did, though. His mom and him were tight. As the child of interracial parents, he’d long since stopped noticing the differences between them; her complexion pale and his a light brown. Her hair a honey blonde and his dark. Not that you could see much of it. He kept it buzzed close to the scalp.