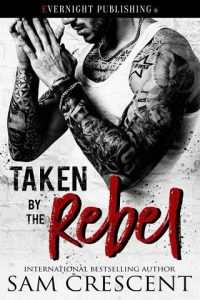 Fay Griffin tried to look for an exit, hoping to escape. He’d already seen her, so it was only a matter of time before she was fucked. This wasn’t good. She hadn’t wanted to go on this date, but her best friend had said she deserved a night of fun. This wasn’t fun.

Especially as her best friend’s older brother, Blaze Carter, had just stepped out of the fighting ring. She had no idea he was still a fighter. If she was completely honest, she had no idea who he was, not really.

She was best friends with his sister, Blair.

When they were in high school, no one dared to bully his sister. Blaze was five years older than Blair, but his reputation preceded him and had everyone around him taking care of her.

With what she’d just witnessed, Fay was petrified. She had to get out of here.

Her date was an asshole.

At dinner, he’d tried to do the whole routine of forgetting his wallet, but she only had enough money to pay for her part of the meal. She refused to pay for him. Fay had been scolded by that one before and never picked up the tab for any man.

This was at Blair’s insistence.

Fay went on dates, but none of them ever lasted. A few dinners here, light lunches there, and she was done. It was probably why at twenty-one years old, she was still a virgin.

She’d be a dead virgin if she didn’t make it out of this abandoned, falling-apart warehouse soon.

Her date had already left her.

He’d picked her up from her apartment, at his insistence, and she had no choice but to accept a ride home from him. Only, he’d come here. Now she had to figure out how to get the hell out of here.

Stepping away from the crowd, Fay tried to find the exit, but each time she did, she came to a door that was sealed shut.

The commotion of the fight terrified her. Her heart hammered against her chest.

Panic clawed up her throat as she found herself at a dead end, in what looked like the locker room.

Fay spun around, coming face to face with the scowling man she’d hoped not to see. Her hands shook a little. “Blaze,” she said.

He was a good-looking man, if a heavily tattooed, highly muscular man was what women found attractive. He had short hair as well, neatly cut, but she knew Blair was the one who took care of his hair. Blair was a hairdresser. She had a lot of focus, which was why she was going to college.

The moment she turned eighteen, her parents kicked her out of their trailer, saying it was time for her to make her own way in the world. She didn’t have a clue what she wanted out of life, drifting from one job to another. She currently worked at a bar, as last week she’d been let go from the diner.

With just one job, she knew it would be impossible to make the rent if she didn’t find something else soon. At least she had three months in advance. She was good at handling money. Making it last. A lifetime of doing it had made her good at it.

The irony was that she wasn’t good at math at all. Failed it a million times, but the moment someone put a dollar sign in front of a bunch of numbers, she knew what she was doing. Crazy.

She didn’t move, but he did.

One step, then the other.

She had witnessed him fight two men. One hadn’t been enough, and to make the stakes more interesting and to drive the crowd wild, two men had fought him. Blaze didn’t even have a scratch on him.

There had been many rumors in high school about Blaze. Some said he was a fighter, others said he was a lover. All bark and no bite, but Fay knew differently. This man was an enigma.

When the distance between them started to lessen, Fay had no choice but to take a step back, then another, and another, until all of a sudden, her back hit the brick wall. She cried out as Blaze slammed his hands at either side of her head.

He’d never hurt her before. Never done anything to inspire fear.

She just knew of what he could do.

She stared at his heavily muscled chest but didn’t really see any of it.

Hands clenched at her sides, she was almost afraid of what was going to come next.

“You shouldn’t be here,” he said. His voice was deep, hard, gravelly.